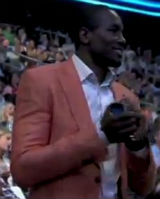 On NBA Draft Night, the drafting interest is rivaled by the fashion that is on display. Young men are introduced to tailors and fashion consultants for the first time, often with mixed results. In the night's wake, there are often myriad of reviews, not of draft grades, but of fashion grades. Grantland offers its own here:

Hat-tip goes to Royce Young at Daily Thunder, who was paying much closer attention than I was during the seventh pick in the draft (Bismack Biyombo), and catches the writer in a bit of a faux pas. Although it's probably not fair to hold Mr. Morris fully accountable, since he makes his bones critiquing fashion and movies and not the NBA, the Grantland editorial staff probably should have jumped on this one a little quicker (a footnote was later added):

When Stern announced that the Congolese Bismack Biyombo would be going to Sacramento, a dapper gentleman stood up to hug him. This someone wore a perfectly tailored salmon-colored suit and an open shirt, and, if memory serves, nothing in the jacket pocket. Either way, it was million-dollar perfection. I don't know who this man is or he even if plays basketball, but if the scouts have any sense they'll track him down and make him an offer.

If you were paying attention or read Young's post, you would know that this "dapper gentleman" was in fact the Thunder's very own Serge Ibaka (Ibaka is Biyombo's fellow Congolese countryman, which is likely why he was sitting close by). To be fair, if Mr. Morris was watching the draft on TV he probably could not have recognized that Ibaka is 6'10" and 240 pound physical specimen. It also points toward how segmented our entertainment markets have become; while Ibaka became a household name during the playoffs, it was probably only in the houses of people who closely watch the NBA.

Here is the footage of the draft (Ibaka pops up about 21 seconds in):

Of course, Ibaka's gallantry is well known in OKC circles, and it looks like he already has an eye for the fashion camera.

Apropos of nothing, Serge has nothing on one of the most memorable ensembles of Draft Night, which came courtesy of Bulls center Joakim Noah: 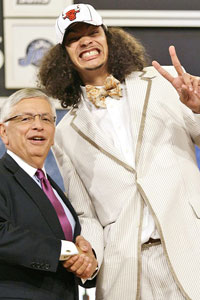 In the words of Bethlehem Shoals:

"Noah. . YOU LOOK LIKE EVERY SINGLE BATMAN VILLAIN ROLLED UP INTO ONE."