The 2011 NBA Season in Pictures by Hoopism

Share All sharing options for: The 2011 NBA Season in Pictures by Hoopism 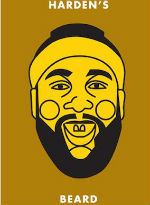 The guys at Hoopism have once again put together a stellar infographic on the NBA. Today, they have posted a retrospective of the season in a series of images.

As we saw last week, the Hoopism contributors have combined an amazing visual style with an astute selection of key aspects of the season past. Artist Milton Un (artwork at right) depicts a great number of the elements that will help us remember the season, from the Miami Heat assemblage, to Blake Griffin's rise, to Kevin Durant's backpack.

Why is sixth-man James Harden a part of this montage? I suspect it is because he's just that cool.