What if we drafted....Chandler Parsons? (Featuring Andy Hutchins of Alligator Army)

Share All sharing options for: What if we drafted....Chandler Parsons? (Featuring Andy Hutchins of Alligator Army) 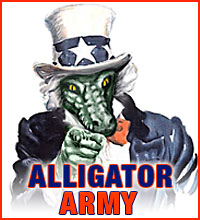 This is a feature that we'll roll out as often as possible leading up to the draft. Basically, we'll be taking an in depth look at some of the potential draftees for the Thunder, and asking questions of the people who know them best, the college blogs that cover them. Up now is Chandler Parsons of Florida, and Andy Hutchins of Alligator Army. The Thunder are looking for a scorer, and have reportedly considered guys like Kyle Singler, so Chandler Parsons is a valid part of the discussion. Regardless, he is a potential future Thunder player, so here's the 411 on Chandler Parsons.... 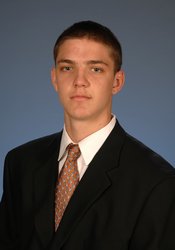 1. What type of player is Chandler Parsons?

Parsons is a tweener small forward/power forward. He's not as quick as a lot of NBA 3s, but he's got great height and decent wingspan; he's not as strong as all of the NBA's 4s, but he's probably quicker than a lot of them, and has a much better face-up game. Parsons rarely ever posted up at Florida, and got most of his points slashing from the wing, shooting spot-up threes, and, in the latter half of his senior season, on an array of tip-dunks.

Below: Should he be taken over Singler? Is he an NBA caliber player? Is he a good fit for the Thunder?

I think Parsons could be a productive NBA reserve. He has skills and leadership qualities coaches and GMs will likely look at approvingly, and he's driven enough for teams to wait for him to shape his body into a more NBA-ready physique.

Parsons could be a good fit for the Thunder as a three-point shooter off the bench, especially in an offense-heavy second unit. But beyond being part of that sort of unit? I'm not so sure.

4. Some people might say that Kyle Singler would be a better selection at that point were he on the board. Is taking Parsons over Singler a justifiable decision, and if so, what aspects of Parsons' game make it so?

I think Parsons over Singler is justifiable, especially if offense is prioritized over defense. Parsons' defense is, charitably, in need of improvement; Singler got better and better at man defending during his Duke career. But Parsons is a better shooter than Singler was in his senior season, and likely passes the same leadership and psychological tests Singler does.

5. In Parsons' Senior year, his PPG was less than it was in the previous season, but his APG was up. Was he looked to as a ball handler at times, and do you think he could be effective in that role in the NBA?

Parsons' scoring was down in part because of the Gators' overall improvement. Erving Walker and Kenny Boynton are both ball-dominating guards, and Alex Tyus and Vernon Macklin got their fair share of touches inside, as Florida, Parsons included, built a more balanced offense. Parsons was never a volume shooter, and his shooting percentages actually fell slightly in his senior year, so his points were down, sure. But not dramatically or worryingly so.

I don't think Parsons will be more than an occasional point forward at the next level. But he has very good vision for a forward, and has had his fair share of incredible passes.

I would guess we'll hear Parsons' name at the end of the first round of the Draft.

7. What is your favourite Chandler Parsons moment?

The easy favorite moment from Parsons' career would be one of the two buzzer-beaters he hit to beat N.C. State and South Carolina in his junior season. But against Kentucky this season, Parsons threw a no-look behind-the-back pass in transition to Vernon Macklin that left me completely breathless. It's not on YouTube anymore, and Macklin didn't even finish the play, but the creativity and showmanship were tremendous.

9. Is there any more information you'd like to include?

Parsons and Mavericks point guard Nick Calathes, currently developing nicely in Greece, went to the same high school. If the NBA's regional announcers are anything like the SEC's, that's a fact you will hear time and again.

My thanks go to Andy for the in-depth analysis. So, what do you think? Is Andy Hutchins a good pick or a bad pick? Are we picking him too early? Will he not slip down to us? Let us know by voting in the poll and dropping a comment!