What if we drafted....Reggie Jackson? (Featuring Conrad Kaczmarek of BC Interruption)

Share All sharing options for: What if we drafted....Reggie Jackson? (Featuring Conrad Kaczmarek of BC Interruption) 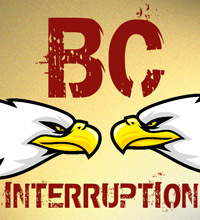 This is a feature that we'll roll out as often as possible leading up to the draft. Basically, we'll be taking an in depth look at some of the potential draftees for the Thunder, and asking questions of the people who know them best, the college blogs that cover them. Up now is Reggie Jackson of Boston College, and Conrad Kaczmarek of BC Interruption. NBADraft.net has the Thunder selecting Jackson with the 24th pick as of right now, so he's a valid candidate for discussion. Regardless, he is a potential future Thunder player, so here's the 411 on Reggie Jackson.... 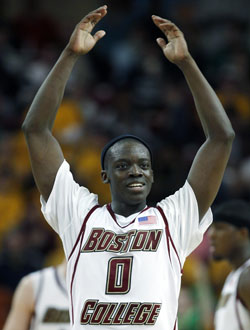 1. What type of player is Reggie Jackson?

Reggie Jackson is a very athletic, long guard. His length and explosiveness are probably his greatest strengths and he definitely has the tools to be an above average defender in the NBA. From his sophomore year to his junior year, he showed vast improvement in his jump shot and became a lethal offensive player in a watered-down ACC. He seems like a very competitive guy and someone that wants to win.

Below: A good fit for the Thunder? Similarities to and differences from Russell Westbrook? Where will he end up in the draft?

I might be a tiny bit biased, but I do think Reggie can succeed in the NBA. Is he going to be an all-star or even a starter? Probably not, but he can definitely be one of the best back-up point guards in the league. He has the ability to be a very good defender and can provide a great spark off the bench for a contending team. One thing that I think gets lost regarding Jackson is the role that he played at Boston College this past season. The Eagles did not have the most talented team in the ACC and Reggie was basically asked to do everything in terms of both scoring and facilitating. Given the proper situation and coaching, I believe Reggie Jackson is better suited to be a point guard and can effectively run an offense if he is not asked to carry the scoring load as well. Comparisons are never easy but I think he resembles George Hill of the San Antonio Spurs.

Reggie Jackson makes sense for the Thunder. Eric Maynor has proved to be a pretty solid back-up guard, but Jackson brings better defense and a more explosive option as a backup to Russell Westbrook. I'm not one to overreact to this past year's postseason but it appears that OKC may be better suited with a more "pure" point guard late in games. Jackson may be able to take some of the ball handling responsibilities from Westbrook and give better structure to the offense. This is not to say that Jackson is a better option at PG than Russ, but if he is placed in the correct role, he could be quite effective.

4. Jackson improved his jump shot during his last season at BC. Was this a result of improved mechanics or better floor positioning, and is this a good sign when considering his learning flexibility entering the NBA?

I think it was a result of necessity. The BC team required Reggie Jackson to do the majority of the scoring and he prepared accordingly by improving his jumper. He struggled a bit during the middle of the season when defenses really started to focus on him and I think that says a lot about what role he needs to play. He isn't fit to be a 2-guard and shouldn't be asked to score 20 points a game in the NBA. The correct role will be vital to his success.

5. Based on what you know, how is he similar to and different from Russell Westbrook?

He is similar in the sense that both are outstanding athletes and both are on the line of PG/SG. Russ is obviously on a whole other level athletically, but it isn't farfetched to describe Reggie as a poor man's Russ Westbrook. He isn't quite at Westbrook's level, but possesses a similar ability to attack and finish at the rim.

Reggie has withdrawn from his various workouts in recent weeks despite never really pointing out a specific injury. If I were to speculate, I would assume that is because he received some sort of promise from a team that is willing to draft him. People have suggested that the Heat would be interested with the 31st pick, but I doubt he will fall that far. I see him going somewhere around 22-27 in the first round.

7. What is your favourite Reggie Jackson moment?

There are several games that he simply dominated in his last year at Boston College and one moment in particular stands out. In their final game against Virginia Tech he simply assaulted them with a barrage of 3-pointers, capped off with an unreal 4-point play. He has impressive playmaking ability and it was on full display on that night. Since the simple description doesn't really capture it, I'll throw in this unreal dunk against Miami. (It was a charge, but still...wow)

Best case scenario I see him as a solid starting point guard on a decent team. Think sort of like Darren Collison of the Indiana Pacers. Worst case scenario he's in some team's rotation as the 8th or 9th guy kind of like the role that Greivis Vasquez played this past season.

My thanks go to Conrad for the in-depth analysis. So, what do you think? Is Reggie Jackson a good pick or a bad pick? Are we picking him too early? Will he not slip down to us? Let us know by voting in the poll and dropping a comment!