Share All sharing options for: Top NBA Draft Busts In Pictures by Hoopism 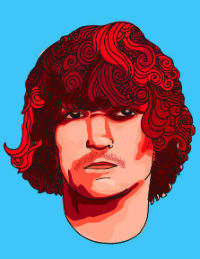 We hadn't posted anything from the Hoopism brothers in a while, but as we ave seen they've been up to some interesting work. Employing the artwork of Milton Un (see artwork at right) they put together their top 10 draft busts over the past 30 years.

Have you ever felt to yourself that Adam Morrison looks like he was an extra from the movie  "Dazed and Confused?"

Apparently Un does, because he made Morrison look like he belongs on the cover of a Jimi Hendrix album. Well done.