What if we drafted....Nolan Smith? (Featuring JD King of DukeBasketballReport.com)

Share All sharing options for: What if we drafted....Nolan Smith? (Featuring JD King of DukeBasketballReport.com)

This is a feature that we'll roll out as often as possible leading up to the draft. Basically, we'll be taking an in depth look at some of the potential draftees for the Thunder, and asking questions of the people who know them best, the college blogs that cover them. Up now is Nolan Smith of Duke, and JD King of Duke Basketball Report. Earlier in the week, NBADraft.net had the Thunder selecting Smith with the 24th pick, but his stock has recently dropped into the second round. Regardless, he is a potential future Thunder player, so here's the 411 on Nolan Smith.... 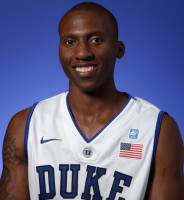 Read the Q&A below!

1. What type of player is Nolan Smith?

He's mentally tough and a very hard worker. I think anyone would be happy to have him on their team, but he'd really fit yours well with the collegial atmosphere there. Plus he'd push people.

Not sure who to compare him to, but he's a gutty kid. In a vague way, Jason Terry. He's much better than people realize. But the kicker is his character, which is why he'd fit with Durant & co. The thing a lot of people don't get is that he's extremely competitive, a very hard worker, and unusually charismatic. He'd be fun even if he were the last guy on the team.

Absolutely as I said above. It could be the best fit for him in many ways. He's talented but also a big character guy. The Thunder is big on that I understand, and he'd have a positive impact on them.

4. Part of the reason Nolan Smith led Duke in PPG was Kyrie Irving's mid-season injury. Had Irving not gotten injured, do you think we would be talking about Nolan Smith as a draft prospect right now?

Perhaps more so, because with an Irving/Smith backcourt, Duke would have been nearly unbeatable and would have certainly not lost to anyone in their path in the NCAAs. Did you see them play before Irving was hurt? They were incredible.

5. What is it that makes Nolan Smith that much less of an NBA prospect than Kyrie Irving? Are these concerns about him well-founded?

Well you have to understand - and you will soon - that Irving is a freak player. He's like Nate Archibald or Chris Paul. He's extraordinary. Nolan's not as good, but not many people are. I would pay to watch Irving at 50. He's just really really good, way beyond what his (considerable) physical talent suggests.

Irving will, or should, go first, Smith I have no clue. If he's not first round, there are some people who will feel foolish later. I'm no scout, but the only concern I would have is his size at off guard. He's solid everywhere.

My thanks go to JD for the analysis. So, what do you think? Is Nolan Smith a good pick or a bad pick? Are we picking him too early? Will he not slip down to us? Let us know by voting in the poll and dropping a comment!