What if we drafted....Norris Cole? (Featuring Tom Mieskoski of Cleveland State Hoops)

Share All sharing options for: What if we drafted....Norris Cole? (Featuring Tom Mieskoski of Cleveland State Hoops)

This is a feature that we'll roll out as often as possible leading up to the draft. Basically, we'll be taking an in depth look at some of the potential draftees for the Thunder, and asking questions of the people who know them best, the college blogs that cover them. Up first is Norris Cole of Cleveland State, and Tom Mieskoski of Cleveland State Hoops. NBADraft.net had the Thunder selecting Cole with the 24th pick, but his stock has recently dropped into the second round. Regardless, he is a potential future Thunder player, so here's the 411 on Norris Cole.... 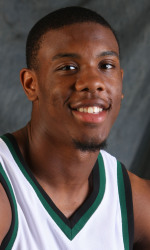 (The above reel features the whole team, but a lot of it is Norris Cole.)

1. What type of player is Norris Cole? Norris Cole is a winner. He will do anything to help his team win. Last year, he was asked to do pretty much everything for CSU.

He's a pass first, shoot second type of point guard. He's a good facilitator, a good defender, and is a good rebounder for a guard.

2. Based on what you know, do you think he'll be an NBA caliber player? If so, who would you compare him to? Yes, he has a lot of qualities that you would want in a point guard. He's a great leader. He's unselfish. He knows how to score. He knows how to get his teammates involved. And he knows how to get to the line and can make them (85.3 percent last year and was even better in the last 5 minutes of the game at 90.3 percent). He's also one of the better defenders in the draft.

Cole models his game after Rajon Rondo, but I like to compare him to former Cleveland Cavaliers guard Terrell Brandon. Brandon, like Cole, was a smaller guard who could score, but was also unselfish and was a pass first, shoot second type of a point guard.

Below: Is he a good fit for the Thunder? Does his talent translate to the NBA? His favourite Norris Cole Moment?

3. Based on what you know, do you think he would be a good fit for the Thunder? Yes, Cleveland State head coach Gary Waters said during the season that Oklahoma City was the one team that had expressed the most interest in Cole.

4. Cleveland State is a smaller Division-I school. Norris Cole has impressive numbers, but does his talent translate to a higher level? His passion to play defense should translate to the next level.

He has gone up against several guards that went on to play in the NBA including John Wall (Kentucky), Jonny Flynn (Syracuse) and Jeff Teague (Wake Forest).

5. In your article about his preparation for the NBA Draft, you said that there were some concerns about whether Cole was a combo guard or a point guard. In your opinion, are those concerns well-founded? Those concerns come from some draft experts. I think the NBA scouts know he's a true point guard. They have been following him since last summer when he had an impressive showing at Nike's Deron Williams Skills Academy for point guards.

Cole didn't have much help around him last season and in some big games he sensed he needed to score more for CSU to have a chance to win.

At CSU, coach Waters likes to assign one of his assistant coaches (Jermaine Kimbrough) to be a point guard coach, like in football, the quarterback has his own coach.

Kimbrough's been teaching Cole how to run the offense for about two years now. I think he might be a little more advanced at running an offense then some of the other guards in the draft.

6. At about what point in the NBA Draft do you think he will be taken? I'm not a draft expert, but most draft experts have Cole projected to be selected in either the late first round or early second round.

7. What is your favourite Norris Cole moment?

The game that sticks out the most is when he had a 41-point, 20-rebound and nine-assist outburst against Youngstown State in February. The only other college player to have a 40-point and 20 rebound game in the past 15 years was Blake Griffin.

A week later, Cole went out and broke the ESPN BracketBusters record with 35 points against Old Dominion.

As a sophomore, Cole was also CSU's leading scorer in their NCAA Tournament first round upset of Wake Forest in 2009.

The worse case scenario would probably be like a Delonte West, where he's a solid back-up, who's also a good defender and can knock down some shots.

9. Is there any more information you'd like to include? Cole was the only player last year to average atleast 20 points (21.7), five assists (5.3) and five rebounds (5.8) per game. Cole was a high school teammate of Oklahoma City's Daequan Cook and is the cousin of Philadelphia Eagles defensive end, Trent Cole.

My thanks go to Tom for the in-depth analysis. So, what do you think? Is Norris Cole a good pick or a bad pick? Are we picking him too early? Will he not slip down to us? Let us know by voting in the poll and dropping a comment!