Share All sharing options for: Mavericks Win With Defense Against NBA's Best

Dallas was not heralded this season as one of the league's best defensive teams, despite statistically being the 5th best in the league, giving up on average only 92.5 points per game. Boston? San Antonio? New Orleans? No, no, and no. Dallas had them all beat. Despite losing Caron Butler, arguably their best on-ball defender, Dallas continued to play committed team defense and keep explosive teams in check. In fact, Dallas faced up and sent away some of the best offensive players in the entire NBA in these past four rounds. Let's take a look.

Round 1 vs Portland Trail Blazers:  LaMarcus Aldridge and Gerald Wallace 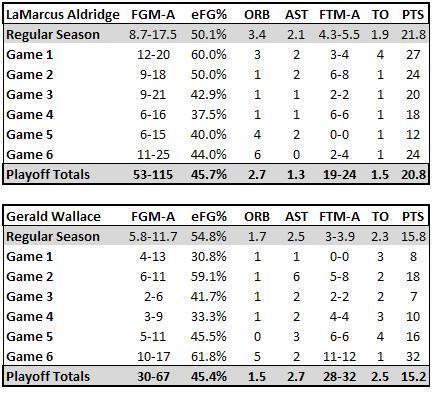 Looking back over the course of the past two months, many NBA analysts actually predicted the Blazers to upset the Mavericks in the first round. Portland was only a six seed, but with the way they ended the season they were seen as a team that was surging at just the right time. Add into that the fact that they had staged one of the greatest comebacks in playoffs history to tie the series at 2-2, it is understandable to think that Portland was primed for the upset. On top of that, Portland had two players of the type that Dallas has the most difficult time guarding - a classic post-up player (Aldridge) and an aggressive swing player (Wallace). Tyson Chandler is a good defender, but when it comes to low post defense he's on his own most of the time. Likewise, Shawn Marion has quickness and length, but not the strength to stay in front of the more muscular small forwards.

As a result, Portland hung tough with Dallas throughout the series, and Aldridge and Wallace performed reasonably well, with their point totals just slightly below season's average. Interestingly though, it was in the two middle games that both men struggled the most, and those are the two games that Portland surprisingly won.  When Aldridge and Wallace came back strong in games Five and Six, Dallas had recovered from their offensive struggles and were able to close out the series.

Round 2 vs Los Angeles Lakers: Kobe Bryant and Pau Gasol 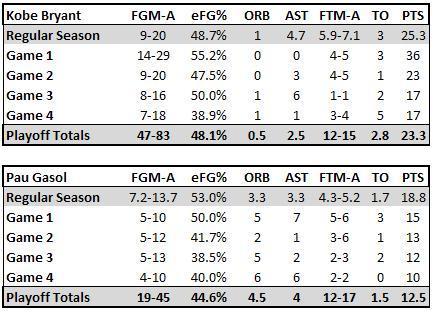 It was in the second round against LA that Dallas started to put everyone on notice that they had a legitimate shot to run the tables. The series started in LA, and in Game One the Mavs were able to claw back from 16 points down to win in the end. Kobe played his strongest game of the series, but in the end it was a costly turnover by Bryant as well as a missed shot that enabled the Mavs to hold on for the win. After that game, Kobe did not approach the same level of production throughout the series. In games Two and Three, where the series was ultimately decided, Bryant's production was about on par with his regular season. It appeared as if Kobe's playoff performance no longer had that extra gear to attain.  Game Four was a 36 point blowout, so his final stats in that game are irrelevant.

Gasol though is a different story. I'm sure that the Lakers had seen what Portland accomplished with Aldridge in the post and hoped to replicate it with perennial all-star Gasol. After all, he was a better shooter, a better passer, and had two championship rings bolstering his confidence. However, the Dallas defense completely marginalized Gasol to the point where he was practically unresponsive. In fact, in this series we got an early glimpse of what Dallas would do to LeBron James later on. Gasol went from an aggressive post-player to one that was overly passive, both in attacking the rim and in giving up the ball. He became so passive that coach Phil Jackson infamously smacked him on the chest during a timeout in Game Three, trying to do whatever he could to provoke Gasol into some sort of emotional response. Even such a public shaming went unheeded, as Gasol managed a weak 5-13 shooting and three free throw attempts for the game. By Game Four, Gasol only had 10 shot attempts and almost as many assists (6) as points (10). The Mavs defense completely unraveled him, setting a template for how they would challenge foes the rest of the way.

Round 3 vs Oklahoma City Thunder: Kevin Durant and Russell Westbrook 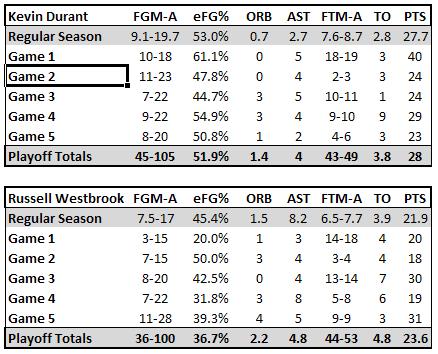 Durant's numbers actually hold up well when you compare them to how he performed during the regular season. He played his best game of the playoffs in Game One, which was the famous shootout between him and Dirk Nowitzki. As mentioned above, Dallas does not have an ideal defender to guard an aggressive swing player, and as we know, nobody in the league has a swing player quite like Durant. Durant's effectiveness both shooting the ball as well as getting to the free throw line could have/should have spelled big trouble for the Mavs. If the Thunder could have put him in a few more better positions to score, the series might have turned out quite differently. Dallas countered Durant by making him do the one thing with which he as struggled this season - make good decisions out past the 3-point line. Far too often, Durant settled for 3-point shots instead of getting inside of the arc.

On top of that, particularly in Game Four, Dallas began to aggressively trap him 40 feet away from the rim. They wanted to see if Durant could make the right decisions quick enough to hurt the Mavs' defense. He could not. Time and time again Durant waited too long and turned the ball over. In the end, his nine turnovers and inability to get inside the 3-point arc greatly hindered his offensive game, and Game Four turned into the one that ultimately crushed the Thunder's playoff hopes.

Russell Westbrook began the series against Dallas as a man who really did not seem to know what role he was supposed to play. He played passive and uncertain in Game One, never really knowing when he was supposed to shoot and when he was supposed to pass (to be sure, he had endured so much criticism up to that point that the uncertainty was understandable). What he did not realize, and what the Thunder did not realize until too late, was that the Mavs were working on Westbrook's psyche as much as his physical game. Just like Gasol before him and LeBron after, the Mavs worked to give Westbrook, whose natural tendency is to go full badger and attack-attack-attack, a seed planted in his mind to think that he could do that and win every time.

As a result, Westbrook was arguably the best offensive weapon the Thunder had, but he kept sliding in and out of the team concept. His over-aggressiveness hurt the team, not all the time, but enough times to allow Dallas to stay competitive. While Westbrook did great in scoring, he committed far too many turnovers from the point position to be truly effective. Finally, Scott Brooks realized that Dallas had no direct weapon to counter Westbrook, but were content to cede Westbrook's scoring as long as he was making the offensive decisions. Brooks moved Westbrook off the ball for stretches, and Westbrook had the same results that Wallace did in round one. The move was almost enough to upset the Mavs in Game Five. Almost.

Round 4 vs Miami Heat: LeBron James and Dwyane Wade 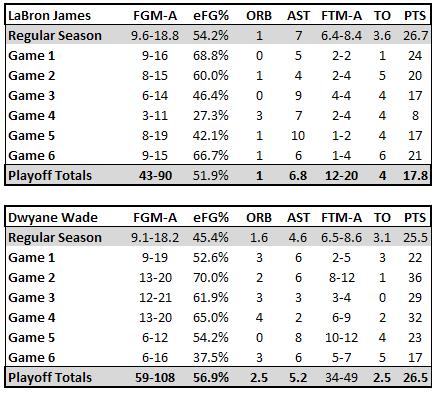 In the Finals, we all know (or think we know) what happened to LeBron. If you examine his numbers as he progressed through the series, you can see how passive he truly became. Just as the Mavs caused Westbrook to play into his true nature (over-aggressive scorer) and used the tendency against the entire Thunder team, so too the Mavs caused LeBron to play into his true nature, which is more facilitator than crunch time scorer. Only one time did James attempt his regular season average in shot attempts. While LeBron still shot a decent percentage, it was alarming that he looked to shoot so infrequently, as if he was only going to shoot as if it were a sure thing. Even his aggressiveness in taking the ball to the rim was lost. Look at his free throw attempts - not once did his attempts reach his season average. As a result, on average LeBron left 4-5 points on the table every night, points that could have been huge given the fact that three of the games were decided by one possession.

Dallas took away LeBron's driving lanes and stopped double-teaming him in the post - they wanted to see if he would shift from facilitator back to scorer. He did not. LeBron's assists went up but his scoring attempts went way down. In total, Miami lost almost 10 points per game due to LeBron's passive nature, and they were simply not deep enough to make up those points elsewhere.

Wade on the other hand recognized the opportunities when they were there, and since he is a superior form of Wallace and Westbrook, his stats through four games were MVP-worthy. Can one man win a playoff series? Wade almost did. He had his team tied at two games apiece heading into the pivotal fifth. Unfortunately for Wade and the Heat, he suffered the hip injury and you can see that he was never the same. Dallas never really figured out a way to slow him down, and in the end it was his own injury that did the most damage. He tried to will his way through the injury in Game Five by getting to the free throw line, but in the end Wade did not have his full faculties. His shot attempts dropped, his misses rose, and Dallas' ability to get him to turn the ball over really hurt Miami in the end.

As a source of comparison, let's look at how Dirk did during the playoffs. A few things jump out: 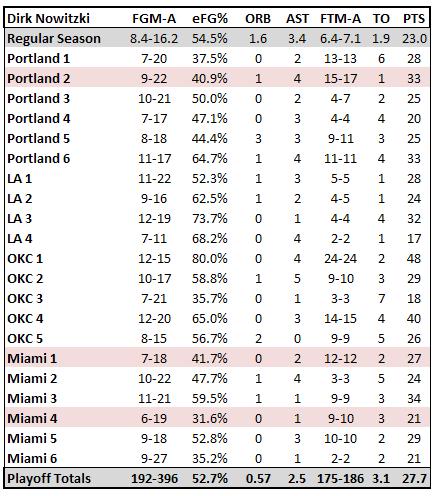 note- all stats provided by Hoopdata.com