One of the hardest things for any playoff team to do is make adjustments from game to game, because in a sense it is an admission that in one area or another, the team's best is not quite good enough. In another sense, it forces the team to do something that it does not necessarily have the inclination to do. And yet, if a team like the Thunder lose a home Game One in the way that they did, the reality is simple - do something different, or prepare to be swept.

Am I overstating the seriousness of the Game One loss?

I personally don't think so. The message that was sent via Game One was simple - the Grizzlies were going to punish the Thunder on the inside and they were going to do it unless and until somebody figured out a way to stop them.

Much is being said about the added aggression that was present in the Thunder's demeanor last night. Indeed, in the Thunder's first offensive play of the game Perkins gave Tony Allen (his former teammate in Boston) a forearm shimmy that put the hurt in Allen for a few plays. It was called an offensive foul, but a message was being sent. In the same way that the Thunder sent a message to Denver in Game Two, so were they sending a message to the Grizzlies - OKC was going to stand up and deal with the physical play, not shrink from it. From there on out, up until about four minutes to play in the 4th, the Thunder were the more physical aggressors.

Apart from the increased physicality, the other big element that changed was how the Thunder applied their defensive tactics. As we gleaned before, the Grizzlies want to run their high pick and rolls with both Zach Randolph and Marc Gasol, which serves the dual purpose of giving them space to work and pulling Kendrick Perkins away from the rim. So either the Thunder staff read WTLC, or I made the most obvious statements possible in my game preview. The Thunder completely changed the way they approached defending the Grizzlies' primary offensive set. They took away the one thing that Memphis does well.

To prevent the Grizz from attacking them in the lane again, OKC backed off defensively. What I mean is, the Thunder staff made the decision that they would cede the perimeter shot to Memphis, regardless of whether it came from Mike Conley or O.J. Mayo. If you look at the combined stats for those two, you can see that they played really well - they shot a combined 16-28 for 40 points, including 4-9 from 3-point range. And yet, even as Conley was scoring at will from the perimeter, the Thunder never adjusted their defense to put more pressure on him. Rather, OKC stayed committed to keeping him out there, even if it meant running underneath the high screens.

In essence, the Thunder were telling the Grizzlies that even if they are having success from the perimeter, it isn't going to change how they deal with Gasol and Randolph. Why would the Thunder cede these shots? I think it is because they and we know that perimeter shooting isn't what Memphis does best, and it is not winning basketball for them. Often, Conley's shots came after the Grizzlies tried to run set plays and the Thunder would not yield their defensive position. Conley had to resort to the outside shot to make sure at least a good attempt was made. It is important to note that, while he did shoot well, most of Conley's shots did not come within an offensive framework; rather they were taken when the defense sagged off and he had nowhere else to go.

Here is what we learned about the Grizzlies' big men:

Zach Randolph: For All of Z-Bo's well-deserved accolades, he does have some physical limitations. Although he looks a bit like Charles Barkley did in Chuck's heyday, Randolph cannot elevate to go over the top of people. Rather, he has to rely on extremely quick and deft footwork to give him separation, coupled with a quick release and high-arching shot. When he can push and then get separation, Randolph can get that shot off anywhere. On top of that, Randolph loves the baseline, especially on the right block. He likes to get the ball low and then spin to the baseline where he can take advantage of his left-handed shot. By using the baseline as an asset, Randolph can keep extra defenders from coming in and contesting his vertically-challenged move.

To counter Randolph, OKC relied on help defenders to close out Randolph's space. Nick Collison played him well straight up, but it was the quick help by the other defenders that made Randolph's shot go astray. Randolph finished the game with zero baskets in the second half. While he was still able to get to the free throw line 12 times, Randolph's was not able to adjust to how the Thunder closed off his space.

Marc Gasol: Gasol works best from the top of the key where he provides the triple-threat of setting good screens, facing up to the rim for a 15 footer, and also rolling to the rim off of his screens. In Game One, the Thunder too often let him either take 2-3 seconds to set up for his jumper, or offered no resistance as he rolled to the rim.

To counter Gasol, the Thunder opted to play him much more physically high out on the perimeter. Gasol is a big guy and fairly strong, but he does not possess the same skill level that Randolph has in dealing with contact. Where Randolph can face up, back up, or spin, Gasol does not have any of these tools, and when the Thunder challenged his path to the rim, he did not have any moves to counter.

The Thunder's handling of the Memphis bigs, both tactically and physically, was the reason why the Grizzlies only had 77 points with six minutes to play in the game. The Thunder forced the Grizzlies to become a guard-oriented offense, and as we saw last night, that is the type of offense in which they are not optimally suited to play and win.

With such good play, this guy here kind of became an afterthought. 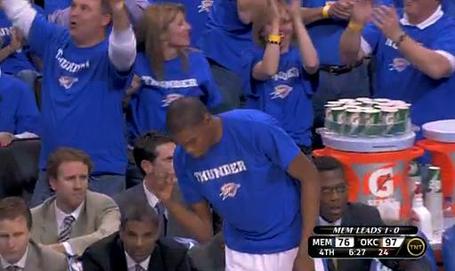