Share All sharing options for: NBA Playbook: Dealing with Dallas' Zone on Offense

Something worth noting - the Thunder put 112 points on Dallas without really having any sort of coherent offensive strategy at all. Dallas is a good defensive team because they have good, competent players. It is not because they have Kevin Garnett or Tony Allen hell-hounds prowling the court. They are never going to aspire to be a shut-down defense, but they don't need to. They're simply smart enough to take away a few offensive options from the opposition, and that is usually enough to give their efficient offense enough margin for error.

Sebastian Pruiti once again did great work looking at the Dallas defense to reveal how they created sets that were just enough to allow them to give OKC the Heisman for three quarters.

OKC vs the Zone | NBA Playbook

I grabbed the first clip he posted because it is the most basic mistake that teams make against a zone, but be sure to look at all of them to see the various ways in which the Thunder met the Dallas zone with hesitation rather than purpose.

A few more comments after the jump. 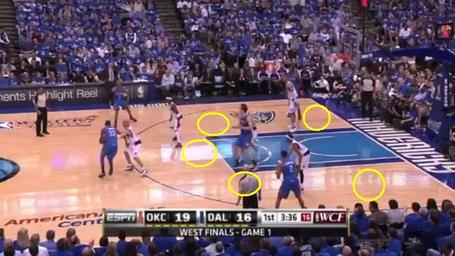 Finally, compare the clip above to this one below, which Pruiti grabbed from earlier in the season. Watch how quickly the ball moves, and no ball handler takes more than two dribbles before passing it up. The ball is constantly moving, which causes the zone to constantly shift.  OKC looking and waiting to get a man into that soft spot. Finally, Serge Ibaka flashes through the baseline spot, which gives Durant enough space to dribble-drive the ball into that area. When the zone collapses on him, Durant makes the good bounce-pass to the cutting Ibaka. As a result of constant engagement and not allowing the defense to set, they get a dunk with three seconds left on the shot clock. The play showed remarkable patience and purpose, two elements to which the Thunder need to return tomorrow.