Thunder Round by Round Ticket Prices, Presented by TiqIQ

Share All sharing options for: Thunder Round by Round Ticket Prices, Presented by TiqIQ 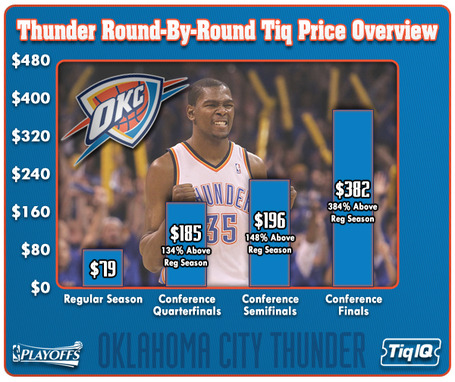 This post is brought to you by TiqIQ, who provide a ticket aggregating service for Welcome to Loud City. To look at ticket prices for the upcoming game and purchase the best possible tickets for your money, click here. To get an introduction to what TiqIQ is all about, click here.

Though Thunder ticket prices were down heading into the second round, they've rapidly shot up in the conference finals. Prices have increased by 48%, meaning that you'll have to shell out the big bucks if you want to see the Thunder play at home. However, the Thunder do have cheaper tickets than the Heat and Bulls, who would have you paying $454 and $683 a ticket, respectively.

The interesting thing is that the Dallas Mavericks, who are a more historic franchise and in a bigger city, have the lowest ticket prices out of the four remaining teams in the NBA Playoffs, at $346. There's a lot of contributing factors, but the fact that the Mavericks have been this far before probably has something to do with it. The Mavs and their fans want nothing less than a championship, and anything else would be considered a failure at this point. On the other hand, once could say that the Mavs fans aren't as confident about their chance to win as in years past, especially considering their stumble into the playoffs and the excellent teams waiting to face them in the East. Whatever the reason, it's nice to know that Oklahoma City can beat Dallas, not only in basketball, but in economics as well.