OKC Thunder And the Problem With Blow-Outs

Share All sharing options for: OKC Thunder And the Problem With Blow-Outs 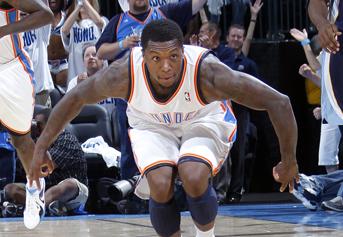 Over the course of this season, the OKC Thunder has walked the straight and narrow. The team mantra, repeated from the top on down, is that everything is about: the team, the defense, the confidence, the patience, and the learning of lessons. The team plays with enthusiasm on the court, but it has only been on the rarest of occasions where one of the players go off-script in the press.

Before the Denver series in round one, George Karl and Raymond Felton tried to stir the pot a little, calling the Thunder players both cocky and talkers of the smack. I think these comments caught everybody by surprise, because we have been watching this franchise since the beginning and there has been nary a trace of anything resembling what Denver was accusing OKC of. Never the less, the media picked it up and ran with it, crafting and narrating the story line. Of course, we know that the narrative was false, and Karl's strategy backfired on them. OKC ran out to a 3-0 series lead and it was really over before it began.

So now, with the Thunder-Grizzlies series reaching its denouement and the "Westbrook is feuding with Durant!" meme petering out, the new nugget on the block is the idea that, at the tail end of the Thunder blow-out in Game Five, the team was yukking it up and running up the score, and that they're setting themselves up for some righteous payback by the Grizzlies.

Where did the catcalls begin?

"For me, Oklahoma City did a little too much celebrating the last couple minutes...Lionel Hollins will show them the tape, and the Memphis Grizzlies will win Game 6 back home at the Mailbox. The big fellows will be upset". - Kevin McHale

"I'm going to take a guy into the stands, and I'm going to make it look like an accident."

Lending credence to the storyline, Kendrick Perkins commented after the game:

"We have to end the game with better class than that. That's too disrespectful in my eyes. That's not what the Thunder are about. ... I think we were too flashy."

The theme continued as various writers started to write their predictions for Game Six:

"Short term memory loss. That's the key for Game 6, after the Oklahoma City Thunder wiped the court with the Memphis Grizzlies, running up the score and celebrating to their heart's desire in a 99-72 blowout win in Game 5." - CBS Sports