Share All sharing options for: Official Word on O.J. Mayo's Game Four Save

Lost amidst the craziness that was the 3OT Game Four, there was a crucial play in the first OT that had the potential to swing the outcome. During OT1 and the Thunder clinging to a six point lead, Grizzlies guard O.J. Mayo lined up for a 3-pointer. James Harden closed on him and made a great block, and Harden's momentum carried him out of bounds. Mayo jumped, caught the ball, and spiked it off of the out-of-bounds Harden's head in order to preserve possession.

The referees originally awarded the ball to the Thunder, but after replay review, they reversed the call and gave it back to the Grizzlies. Memphis capitalized on the reversal and hit a 3-pointer, which further contributed to the OT dramatics.

What had bugged me to no end though was that, if you watch the replay, it is plain and obvious that, when Mayo leapt to grab the ball, his right foot is clearly on the sideline, which should have rendered him ineligible to touch the still-in-play ball. It seemed to me that, by Mayo touching the ball before reestablishing himself as part of the court, it should have been an out-of-bounds violation against the Grizzlies and the Thunder should have been awarded with possession.

The broadcast team ran the play numerous times while the refs deliberated, and from every angle it appeared conclusively that Mayo's foot was out of bounds. Surprisingly, both of the broadcast guys completely ignored what seemed to me to be a crucial element of the call.

Darnell Mayberry at the Oklahoman also wondered why this call was ruled the way it was, and so asked the league office for clarification. You can find the explanation in full here:

A full sized image of the play can be seen after the jump. 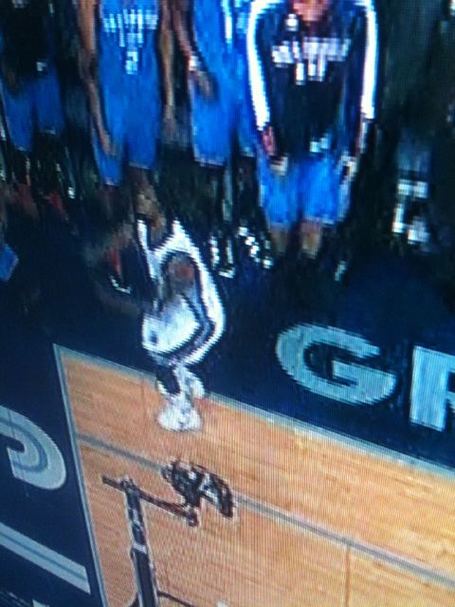 "According to NBA replay rule, NBA officials are not allowed to examine and rule on boundary infractions in addition to deciding who touched the ball last and determining possession."

"When a referee is reviewing a question on who the ball went out of bounds on, the referee is only permitted to check who hit the ball last, not boundary infractions"

Let's go to the rule book:

Item: Out of bounds plays in two minutes of game and of all subsequent overtime periods.

Trigger: Officials are uncertain as to who touched the ball last or if the ball was last touched simultaneously by two opponents when the ball goes out-of-bounds.

Mayberry's take is that the refs called the play correctly according to the letter of the law. Color me...underwhelmed, but not by Mayberry's explanation. He does as best he can to interpret the rules that seem to incorporate the incident at hand. The first quote I took from his post, the part about the refs not being able to rule simultaneously on a "who touched it last?" call and "was he out of bounds?" call seems redundant and potentially detrimental. I also do not actually see that component listed in the rule book I linked above, but I trust that the league conveyed the rule accurately to Mayberry.
The reason I think that phrasing is redundant is that, in the case of the Mayo play, once he stepped out of bounds, Mayo was no longer part of the court. He was an ineligible player up until he re-established himself in the court of play. Therefore, once Mayo touched the ball the play should have been called dead and the Thunder should have gotten the ball. To look at Frank's comment above, it would seem that the trigger of the play was satisfied. The ref can check to see who touched the ball last; since Mayo was out of bounds and touched the ball last, the play was over. Who hit the ball last? Mayo hit the ball last.
The only alternative interpretation I can imagine is that the refs saw the sequence as two distinct plays (Mayo stepping out of bounds, and then bouncing the ball off Harden's 'hawk), and they framed the replay review in terms of the second play, not the first. They were therefore ceding that the first play had been missed completely because, per the notes above, a play can only be reviewed after the refs make a determination of THAT particular play. Since the whistle did not blow after Mayo stepped out, that specific part of the sequence was rendered a non-reviewable matter and they could not reverse the step-out. Ergo, the only aspect of the play that was reviewable, the head-ball, was an easy call to make since Harden was clearly out of bounds.
So to make a long story short, I do not like the rule, I did not like the call, and would you kindly get off my lawn now.