Share All sharing options for: Someone Changed the Scoreboard to Read "Thunder Den" In Early Second Half Of Thunder-Nuggets Game 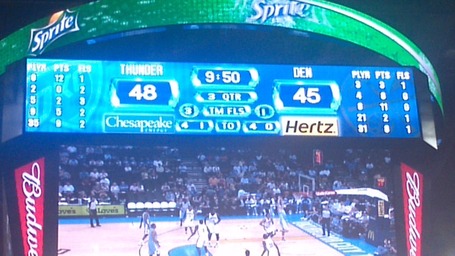 File this one under "odd stuff that no one notices". But last night in the arena, after halftime, the scoreboard was changed. Instead of the scoreboard reading "Thunder"and "Nuggets" as it normally should, it read "Thunder" and "Den", which might be read by someone as "Thunder Den". Was this some employee's subtle way of getting out what he'd like the arena to be named, or was it a simple error? After all, "Den" is technically the correct way of addressing the Nuggets, because they are from "Den-ver".

The world may never know, but the name certainly sticks. "The Thunder Den" doesn't really make any sense, since the only things with Dens are lions and people with rather large houses. Still, it does have a ring to it, and I would fear going into a Den that was occupied by a large quantity of Thunder. Then again, anything is better than boring 'ol Oklahoma City Arena. Regardless, later in the third quarter, the scoreboard was changed back to say "Thunder" and "Nuggets", with "Thunder Den" never to return. 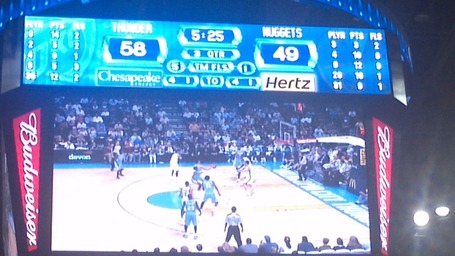