Should the Thunder Raise a Banner?

Share All sharing options for: Should the Thunder Raise a Banner? 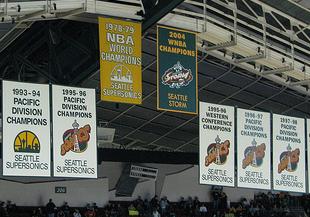 The Oklahoman's Darnell Mayberry raises an interesting question that probably already has a real answer, but I think it is still worth considering:

Will the Thunder Raise a Northwest Division Championship Banner? | NewsOK

I agree with Mayberry that it does not fit into the OKC Thunder ethos of making a big deal out of something that is merely a stepping stone toward the real goal, which is a championship. However, it IS a big deal, and one worth notice because of how quickly the organization has righted itself and doing it in a way which the rest of the league has admired.

One thing I would be utterly shocked to see however is any sort of recognition made before tonight's game against the Nuggets. There's no need to stoke that fire.

UPDATE: Here is a great take on the diminished usefulness of divisions within the East and West conferences.

Time To Do Away With Meaningless Divisions | Sports Illustrated

It should be the easiest thing in the world to simply take the best eight teams from each conference and make a playoff. All divisions do is make it more complicated than it need be.