I'm extremely pleased to introduce TiqIQ, a ticket aggregating service that has partnered with Welcome to Loud City and SB Nation. If you want to take a look at it, click HERE! In short, TiqIQ will get ticket prices from different ticket sites and list them together so you can get the absolute best price. 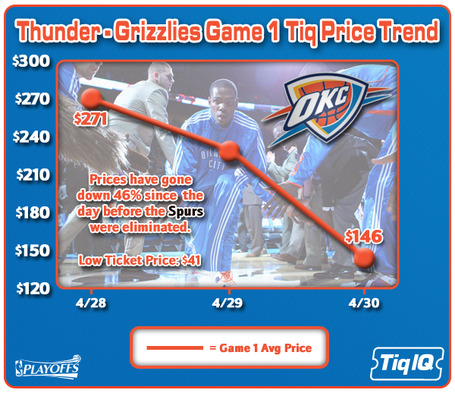 In addition to the new partnership, I bring you even more good news! Because the Thunder are facing the eighth seeded Memphis Grizzlies instead of the San Antonio Spurs, ticket prices have actually plummeted over the last few days. So if you wanted to see Thunder playoff basketball, the best time to buy tickets is NOW! And don't underestimate the Grizzlies and think that this will be an easy series. Remember that the Grizz have beaten the Thunder three times this season, and that the Knicks made it all the way to the NBA Finals in 1999 as an eight seed!
Additionally, all home game ticket prices have gone down (not just Games 1 and 2), and as a whole ticket prices are down 27%.
Here's some answers to questions you might have....
What is a ticket aggregator?
It basically goes to different ticket sites so you don't have to. Instead of wasting time going to places like eBay and StubHub individually, you can see all of their prices listed side by side! Thus, you're guaranteed the best price.
What separates TiqIQ from other ticket aggregating sites?
Not only does TiqIQ list prices from many different sites, it actually tracks ticket prices over time so you can buy them at the optimal moment for the optimal price. Additionally, they list prices in zones rather than specific sections, so it is easy to compare ticket prices from similar sections, rather than having to click on each individual one. In the words of TIqIQ's website:

The goal of TiqZones is to show buyers the full set of similar tickets for an event they're interested in and give them the ability to evaluate any ticket based on other tickets that are like it. Today, most large venues have 10-20 different pricing tiers, and the complexity is growing with each new season. As a result, it is getting harder and harder to evaluate whether you're getting a good deal.

Our goal is to simplify venue maps into easily-understood and organized groupings, so buyers can make sure they're getting the best deal possible in a section where they want to sit.

Does TiqIQ charge additional fees if I buy through them?
No! That's the beauty of it!
Does TiqIQ include transaction and shipping fees from the actual ticket sites?
Not yet, but for now, if you want a rough estimate, you can add about 15% to the listed ticket price.
You're just a big phony! Sell-out!
Honestly, I wouldn't promote a product on my blog unless I legitimately supported it. And TiqIQ is one of the greatest things to come along in a while. I have season tickets for the Thunder, but I recently purchased tickets for a System of a Down concert and the CONCACAF Gold Cup. Both experiences were terrible and frustrating. I had to look at a bunch of different sites and it consumed a large portion of my time. Since I had to spend so much time searching, some of the best tickets were snatched up, and I had to end up overpaying to sit where I wanted. TiqIQ would have been a godsend in both situations, and would have ended up saving me boatloads of money.
In the end, not only am I lining my own pockets with this partnership, I am also doing a public service. At least, that's how I like to see it in my own, twisted mind. I'm not forcing you to buy the tickets, nor is this service taking priority over any regular site content. Think of it as me handing you a coupon book, rather than trying to sell you a product. You can throw it in the trashcan down the street; I don't care. But if you did, you would be missing out on the best way to buy second-hand tickets, and that's the truth.
I still don't like you!
Well, my friend, you can't please everybody.
To look at ticket prices now, Click Here!
To read more TiqIQ Frequently Asked Questions, Click Here!