Russell Westbrook: What Went Wrong and Why

Share All sharing options for: Russell Westbrook: What Went Wrong and Why

Since the entire world of online sports analysis is chiming in on what I shall now dub "Badger-Gate," I figure I'd better offer something up as well. Heaven forbid some Thunder fan newbie comes a-callin' and we haven't properly weighed in on the Game Four dis-assemblage which pertains to young Russell Westbrook.

First though, let's play the game of: Spot That Stat Line!

Now, as you can probably guess, one of these stat-lines is Russell Westbrook's from last night's game. However, I took the liberty to shave off 30 seconds of his game. Can you figure out which one is his?

Even with this slight alteration, you can still probably guess which one is Westbrook's. However, by eliminating those 30 seconds, which just happen to be the last 30 seconds of last night's game, the stat line looks considerably different. It still isn't great, but it isn't visually as striking. If we add in the final 30 seconds of the game, Player B turns into this:

Now, if you're a stat savant, can you spot which three prominent players submitted A, C, and D?

Player A is Kobe Bryant, and that was his stat line from Game 6 of the 2008 finals, a game in which the Lakers lost to the Celtics by 39 points.

Player C is Michael Jordan, and that was his stat line from Game 4 of the 1997 Finals, a game in which the powerhouse  Bulls scored a mere 73 points and lost to the Utah Jazz by five points.

Player D is Derrick Rose, and that was his stat line from Game 4 of this year's playoffs, a game in which the Bulls lost to the sub- .500  Indiana Pacers by five points.

What is the point?

I have two points to make:

1. Every player who strives to be great will submit bad performances.

I just happened to choose some of the more prominent games that Jordan and Kobe have played when the stakes were much higher than last night's Game Four. In each of those games, the championship was on the line. Jordan's Game Four allowed the inferior Jazz team to tie up the series at 2-2. Kobe's Game Six was the close-out series in the 2008 Finals, which allowed the Celtics to claim banner #17. Those two games were some of their highest profile failures, but if you look at the entire body of each player's work, you will find plenty of other submissions that scrape the barrel of such futility. I threw Rose's game in there because it was similarly poor, was in a similar scenario (Game Four close-out) and I don't think has received nearly as much criticism as Westbrook has. Needless to say, great players occasionally submit clunkers in big moments that cost their teams the win.

In fact, amidst the clamor for Westbrook to, "Pass the #@$@!! ball to Durant!" we conveniently forget some of the eggs that Durant has laid this season. You-remember-those-don't-you? The most painful submission this year was probably the game where Durant hoisted a 30 foot jump shot with plenty of time remaining against the Grizzlies, costing the Thunder a chance at the win.

Kevin Durant wants to be the man just like Westbrook does. They both have the talent and desire to win games. They both also have the ego to think that their ability can transcend the moment and carry the Thunder to those wins. Within that dynamic is both risk and reward. The risk is that sometimes the players' final product represents the very difference between a win and a loss, like last night. The reward is what you get in Game One of this series. NBA history has laid out pretty clearly that if you want the latter, you have to be willing to accept the former.

2. Reflection permits us to see that immediate perception is not always reality.

Denver fans today are rightly celebrating Westbrook's epic collapse in the 4th quarter, which breathes another shot of life into the Nuggets team. Russ did come up small, but  we can today look at what really happened in those last few fateful sequences and see if reality holds up to our original perceptive thin slice.

a. Looking Back At the Final Five Minutes of Game Four | Daily Thunder

Royce Young at DT has performed this exercise a few times this season, and the moment by moment breakdown is always illuminating. If you read through his detailed examination, I think you'd be hard-pressed to disagree that, while there were some really poor decisions that Westbrook made down the stretch, it is nowhere near as egregious as we initially thought immediately after the final buzzer. Young argues that:

"Re-watching it, I'd say the two bad [shots] were the 20-footer with 4:46 left and the desperate 3 with seven ticks remaining. His 3-pointer over Gallo wasn't the best decision in the world, but with the shot clock up against him, he chose to shoot instead of drive. He probably should've attacked and maybe stopped for his good 18-foot jumper, but he went for the big shot."

In a chaotic ending where it is sometimes difficult to separate one play from the next, I think that the lingering two images we were left with were: the 3-point air-ball, and the last second wild off-balance 35 footer (followed by cries for a foul call), two images that to many re-confirm the knock against Westbrook. It is the impression that he is wild, out of control, self-centered, and takes unnecessarily reckless points of attack. I know I felt it myself, thinking, "There he goes again." However, in a late game stressful situation, how many players would have acted differently? (I personally don't recall anyone excoriating Lou Williams for his 3-point shot against the Heat; was that shot attempt any better or worse than Westbrook's air-ball? The only difference to me - Williams' shot went in.)

However, I think these two lingering images, because they reinforce peoples' arguments against Westbrook, are disproportionately magnified. End of game chaos brings erratic play, and if Westbrook had made one of those final 3-point attempts, the perception would be entirely different today. If your argument is that Westbrook isn't the kind of guy who can knock down game-deciding 3-pointers, well then, your short term memory apparently doesn't extend past one month.

b. Looking at Westbrook's Poor Decisions - Was It All His Fault? | NBA Playbook

Sebastian Pruiti does his standard exemplary job breaking down the actual footage of the game to let us see better how the key plays unfolded. He parses out one particular play that Young also highlights in his post (#12). With about 50 seconds to go, the Thunder had crawled back from nine down to be within two, and they had the ball. This sequence represented OKC's last best attempt at turning the tables. There was plenty of time to work, so they could apply just about any offensive play that they wanted to. The Nuggets interior had gone soft because both Nene and Kenyon Martin had five fouls. Indeed, drives into the lane were where Durant and Westbrook were hurting the Nuggets the most. Unfortunately, the entire sequence looks imprecise and lazy. I don't know if a timeout would have helped here, but in situations like these, every player needs to know exactly what he is going to do, and do it correctly. Crunch time is as much about good passes, good screens, and hard cuts as much as it is clutch shooting. Here is Pruiti's video:

If you watch the sequence a few times, you can see that the entire play is run with a strange level of hesitation. Serge Ibaka originally fakes a screen for Durant and then cuts across the lane, but he doesn't sell the cut, and it allows his man Martin to linger in the paint. Even then, however, there is huge opportunity for Durant.

If you freeze the frame right at 0:15, you will see this image: 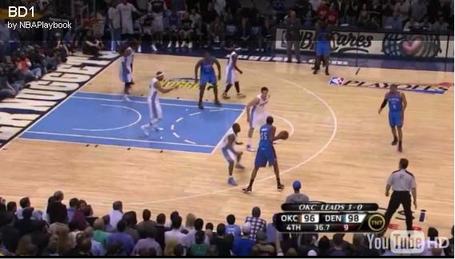 Durant has the ball on the left wing, and the entire bottom third of the court is sitting there wide open and ready for him to take a bite. Martin is hedging toward Ibaka, so there is nothing impeding Durant's path if he were to pivot quickly and drive hard to the baseline. At that point he could either challenge at the rim, or he could fade to his favorite spot on the baseline to shoot his fadeaway. And yet, for some reason, Durant does not take it. The game, as improbable as it may seem, is right there for the taking and Durant did not want it. Instead, he rotates the ball back to Westbrook. Westbrook had nowhere to go with three seconds remaining, so he forced the shot over the taller Danilo Gallinari. It was a huge missed opportunity, because there is no telling how the shaky Nuggets would have handled the situation had the Thunder been able to tie.

Suffice to say, in this critical play Westbrook was hardly the only one to blame, and gives further credence to the fact that just because he was the last man to touch the ball, it does not necessarily mean he was the one who made the bad play. He had set up Durant to be in a great position to score, and Durant did not chase the opportunity.

The point of all this discussion is not simply to be a Westbrook apologist. If you've read our commentary in this space, you will know that we have lofted a fair share of criticism toward him, and I still stand by our assessment of Westbrook's strengths and weaknesses. That said, it is important to note that Westbrook's game, while poor, was not nearly as poor as we originally made it out to be. I think that the lasting impression of him - the air-ball and the 3-point desperation shot - lingered before us like a rotten egg, preventing a full assessment of what really went wrong.

On top of that, the final few sequences emphasize another facet to each game - sometimes it doesn't matter what you do, but when you do it. When I removed those 30 seconds of game time, Westbrook's stats changed from "putrid" to "solid-but-not-great." If Westbrook had taken those additional four shots earlier in the game to get to his "30 for 30," (thanks, Tramel), but it had been Durant that missed the final three big shots, the perception of the outcome would be entirely different.

Sometimes clutch players, even the most noted clutch players in NBA history, fail. That's ok. What is not ok is when players stop (or never even have the courage to) chase the win. If Westbrook turns into the guy who decides to give up the chase, the Thunder will as well.