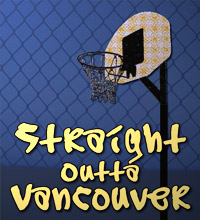 We continue to get other teams' bloggers to provide us some perspective on how those bloggers think their seasons have gone. Today we have the Memphis Grizzlies blog Straight Outta Vancouver, which is run by Griffin Gotta.

It is true, the likelihood of the Grizzlies and Thunder facing off in the playoffs is low. Honestly, I'm kind of glad. The four games the Thunder played against Memphis this year were real battles, and I fear them more than the Hornets, Nuggets, or Trail Blazers.

I hope you enjoy Mr. Gotta's answers about one of the Thunders' main nemeses this season.

I hope I'm not overstepping my Thunder blogging bounds to say that, of all the teams that I got to see play the Thunder this season, Memphis probably impressed me the most with the way that they play. They've had injuries and they have some talent deficiencies, but they play hard. So hard. Tony Allen, the Grizzlies' bargain free agent, really came into his own in those games and it takes special kinds of performances like the ones he had to make a jaded guy like me into an instant fan, despite the fact that it was against the Thunder. His post-game interview was epic:

On to the questions:

1. In whatever context you prefer, how would you grade the Grizzlies' overall season?

Going on the high school summer gym class grading scale of Pass/Fail, the Grizzlies' season thus far has been a Pass, no doubt. They've gelled more and more as the season has gone along, survived that weird O.J. Mayo/Tony Allen scuffle, then for some reason almost but didn't quite pull the trigger on a Mayo trade (management does deserve credit for not blowing up the team nucleus and making a run at the postseason, though; unless you're a big Hasheem Thabeet fan), and then not only kept their collective head above water following the Rudy Gay injury, but in fact will be participating in the playoffs for the first time in awhile. When you look at the roster, there's certainly talent here, but the Grizz came together in a way that I don't think many expected. Plus, the playoffs should usually equal a "pass."

2. The Grizzlies took the season series between Memphis and OKC, 3-1. If I'm not mistaken, in all of those games Memphis was short-handed. Why do you think Memphis had such great success against OKC this year? I must admit, watching the Thunder lose to the Grizzlies was exhibit 1a in the argument that the Thunder were over-rated.

One of the biggest reasons for the Grizzlies' success against Oklahoma City this year was Tony Allen, both offensively and of course defensively, where it all starts with Allen. He has the ability to harass Durant enough so we're only on the "Let's hope he's not completely unstoppable tonight"-Durant level. Also, his aggressiveness out in the passing lanes has been contagious in Memphis, and when you're playing a guard like Russell Westbrook who can be prone to turnovers, steals help Allen and the rest of the Grizz get out in transition, where they are quite dangerous.

So yeah, I'd say Tony Allen because he was the biggest reason that popped in my head at this time.

3. The Grizzlies are being described as the toughest out in the playoffs at this point. Why do you think that is? What has allowed the team to play so much better than its individual parts might suggest?

I think people may be worried about the Grizzlies because they are a physical team with a whole 'lotta confidence right now. This team really does seem to genuinely root for and support one another; and that's translated to better basketball as the season has gone along.

They've beaten good teams down the stretch, they play crazy-aggressive defense, which, when it's clicking and the opponent playing into it, can really hijack the pace of the game. And of course, they can consistently score in the paint; a trait probably better to rely upon in the playoffs than say, jump-shooting. Leading this charge is none other than Zach Randolph, a legitimate threat whom the first round opponent will likely be zoning in on the most. Especially after losing Gay for the season, to have another player step into the oft-discussed Number One Option role is crucial towards having a chance for success in the postseason.

Many thanks to Griffin for taking the time out to answer our questions, and best of luck to he and the Grizzlies as they get set for the playoffs. Be sure to follow his work at Straight Outta Vancouver.