Share All sharing options for: A Look Back: Thunder vs. Bucks, October 29th, 2008

As we enter the final game of the regular season, something occurred to me. The Bucks will be the Thunder's final regular season opponent at home, yet they were also our first ever matchup at home during our first season as the Thunder.

So, I figured it would be a nice time to take a look back at what life as a Thunder fan was like three years ago. Back when the Oklahoma City Arena was the Ford Center, when Earl Watson started over Russell Westbrook, when P.J. Carlesimo was our coach, and when nothing but optimism for our new team kept the Arena full.

Without further ado, here is my recap of the Thunder's first game, all the way back on October 29th, 2008. It was posted to my original Thunder Blog, nbaokc.blogspot.com. I was 17 at the time and a senior in High School, so excuse any grammar and spelling issues that might be present. 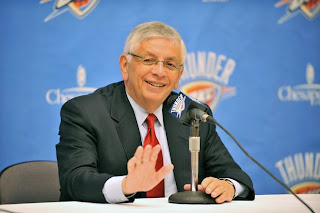 David Stern: Cutest Commissioner in All of Sports.

I got to the game early today. And, me being the media magnet that I am, got onto KFOR again!

Big ups to Marika Lorraine for recognizing me and interviewing me. It starts at about 4:27, and I'm shown twice. Nothing AMAZING, but still pretty awesome nonetheless. I was also interviewed by NBATV. Hopefully I'll be able to show that one too, but its a bit less substantial.

There were a slew of pre-game activities. For main attractions they had a band that did mostly 80s cover songs, a BMX show, and some country-western band which sounded horrible. On the side booths, they had bungie basketball (as Lance West shows in the video above), freethrow shooting, mini basketball hoops, and food. They had the flags of the NBA teams up, and while it looked exciting, it was pretty boring waiting around for the most part.


I finally got in to find out that Bonigi Brothers got taken over by Pizza Hut! They used to serve big slices of pizza (1/6th of a huge one) for $4, but now Pizza hut has tiny Personal Pans for $6. Ultra-Lame. I had some burgers from the Route 66 Grill, but, needless to say, I won't be eating in the arena very often anymore. At least Ben still has the world-famous Slap Shots.

Anyway, I ventured to my seat to see a pre-game performance by none other than....the C&C Music Factory. That's right, the band that made "Everybody Dance Now". And, lo and behold, that's what they played! For 10 straight minutes. I'm not kidding, a 10 minute rendition of "Everybody Dance Now". Well, it was fun!

Then, David Stern and Mick Cornett gave some words. The big moment there had to be when David Stern said, "Oklahoma City, welcome to the National Basketball Association".

Boy, did that ring true tonight. The team looked horrible out of the gate. It was tied twice at 2 and 4, but, before I knew it, the Arena was virtually silent. I looked up, and the scoreboard said 20 to 8. Welcome to the NBA!

The team kind of hovered around 10-15 behind before they fell behind by a full 20 before the 4th quarter began. They tried to give Milwaukee a run for their money, beating the deficit down to 9, but a well-placed timeout and bad substitutions by P.J. Carlesimo put the Thunder away for good.

The key to revitalizing the starting lineup here might be benching Earl Watson. While he and Westbrook had the same amount of assists, Westbrooks driving actually helps the Thunder. Watson will sit at the top of the key, hardly creating any ball movement. Westbrook will drive the ball down to the post, and create opportunities for guys like Chris Wilcox, Desmond Mason, and Joe Smith. His method isn't perfect, but every indication I'm getting now is full steam ahead for Westbrook.

I wouldn't blame Johan Petro's performance tonight on himself. He needs someone to distribute to him, as he's completely inept at creating for himself. His defense was a bit off, but Watson certainly didn't help him. 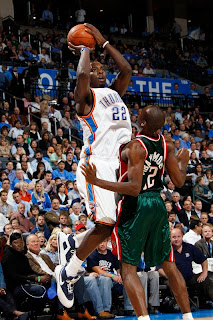 Kevin Durant and Jeff Green were a large part of the problem tonight. As far as I'm concerned, I'd bench those guys from what I saw of them tonight. For the amount of opportunities they got, their production was amazingly weak. If you look at shot percentage, they weren't much better than Johan Petro (they went 5-14 and 2-7, and Petro went 1-5). These guys have got to learn to either make their shots or pass it....which brings me to my next suggestion.

Pass to the open man! There were so, so many times when guys would just go for the horrible shot rather than pass to the guy who had a wide, wide open midrange shot. Granted, these don't walways go in, but they go in a lot more than circus layups do. 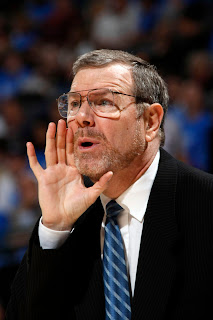 Lastly, a suggestion to our coach. When a lineup is working, don't mess with it! There was about 5-6 minutes left in the game, we just made a huge run to get within 9, and he makes 2-3 different substitutions! Just because Durant and Green are your franchise players doesn't mean that you have to put them in when their backups are doing perfectly fine! 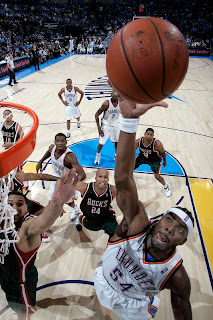 Simply awesome. No big streaks, but he produced all game. Not an all-star performance, but definately a refreshing diamond in the rough tonight. 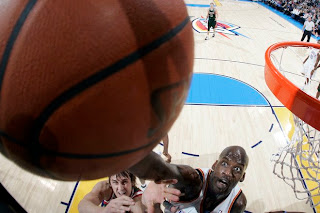 Really not his fault, but Johan Petro might as well have been a waste of space out there on the floor tonight. Didn't really hurt the team, but didn't help a whole lot either. 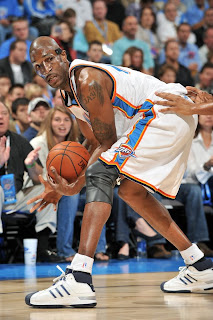 He was shaky at first, but he did a wonderful job pulling out key plays down the stretch. He was an instrumental part of the run in the 4th quarter, he served as an endless array of pick n' rolls, and he played excellent defense. 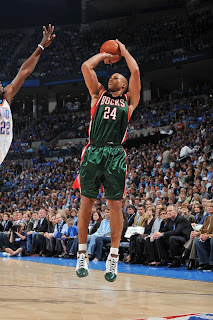 The Bucks were almost as inefficent as the Thunder tonight, and Charlie V was no exception, but he did do the best out of his team. His rebounding really helped them out of a lot of jams tonight. I almost gave this to Bogut, but he really did fizzle out after the first.

Lowballing: The Hornets banner thanking them for their support from 2005-2007 is offically gone. That's just sad and lame. It should remain in memory.

Kelvin Sampson's name was misspelled in the program as Kelvin Sampsn. IT was the only grammatical error I noticed. Tsk tsk.

Highballing: Luc Richard Mbah a Moute has to have the coolest name in the NBA.

Next Game: Saturday at the Houston Rockets.

Breaking News: Bart Conner was there.