Phoenix Suns Q&A II: Suns Blogger Checks In, About Ready to Check Out

Share All sharing options for: Phoenix Suns Q&A II: Suns Blogger Checks In, About Ready to Check Out 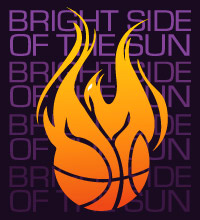 This afternoon we have the privilege of welcoming black one of the main bloggers at SB Nation's Phoenix Suns site, Bright Side of the Sun. Wil Cantrel, who was kind enough to answer our probing inquiries before, joins us again to reflect on the past, present, and future of the Phoenix franchise. Since the Thunder and Suns will be concluding their regular season series tonight, we thought it would be good to check in once more.

Phoenix Suns Q&A: A Thunder Fan's Questions for Bright Side of the Sun

Let's jump in. I must warn you though, this is one Suns blogger that is feeling a little salty.

1. This is a question that is on everyone's mind - how is Steve Nash's pubic bone?

Somehow I knew you'd start with this...I tend to think it is still "slipping" as he terms it and giving him trouble. I think he's made maybe 10 of his last 27 field goal attempts, so he certainly is not healthy.

And for the record I really have no idea how you injure a pubic bone nor can I generalize where exactly it's located and how it effects other "muscles" of that region, if that's what you are getting at.

At this point in the season, any season, Steve Nash is suffering from various maladies. His back is no doubt killing him, which effects a variety of other parts of his body. As far as pubic bone though, he has stated it has improved, but it is by no way 100% and certainly effecting his game.

2. What is the general attitude of Suns fans right now?

One word-Resignation. The season: over. Nash as a Sun: probably over. Winning: probably no chance for awhile.

With the Suns on the outside looking in (four games out with 10 to play), what do you think Suns fans want to see out of the team in the remainder of this year?

I think you have already seen what Suns fans want at the moment: bench Vince Carter and Lopez and put the best 5 on the floor to start a game. Also, Josh Childress has gotten more time as has Jared Dudley. I think a lot of us would like to see Aaron Brooks play 30-40 minutes to see what the Suns have in this kid. Whether or not it's worth signing him this offseason (or what he's worth) and if he can be any kind of bridge to the future should Nash be dealt this off season.

Is there such a thing as a "moral victory?"

A moral victory? Since the the teams on the remainder of the schedule have something like a .582 winning percentage, any win from here on out could be a moral victory. But we all know moral victories are empty, kind of like hooking up with your ex-girlfriend some drunken night. It may feel good on some level, but in the end you realize something very important is missing.

3. The Suns' current starting five is Nash-Hill-Dudley-Gortat-Frye. Assuming there is a 2011-12 season:

a. Do you see that starting five debuting next October?

b. If so, how does that team win an additional 9-10 games to push itself up into the 50-win (and playoff) stratosphere?

c. If not, what are the team's major short-comings and how do you think they will be addressed?

Name it, the Suns need it. I think this is the last season you will see Nash/Hill/Lopez wearing Suns jerseys. The FO has prolonged a huge rebuild, opting to squeeze out the last/best Nash has. The problem is that they didn't have enough talent to take the pressure off of him. Amare Stoudemire left, Goran Dragic didn't step up, Hedo Turkoglu didn't fit.

The Suns have zero young talent to work with. Or perhaps a little greater than zero. They have their core of Frye, Dudley, Gortat, but the draft picks of recent years: Earl Clark and Robin Lopez have not panned out. Clark was a questionable pick by many, and I think the Suns did not see enough progress in him to keep him around. And then you have Lopez who may or may not be injured, may or may not have some emotional issues to deal with, but nonetheless, underperforming compared to last year's standards.

4. It wasn't that long ago that the Suns were where the Thunder are now - young, exciting, and on the verge of making a lasting statement on the Western Conference. That said:

a. Do you have confidence in Suns management to re-start the cycle so that in a year or two we'll see a completely remade team that can contend for four to five years?

My personal opinon is that the Suns are in for 2-4 seasons of misery. If we ignore the CBA/lockout situation, the Suns do have $ to rebuild via F/A. But what do you do with the absence of Hill and Nash? You cannot simply replace Nash with Aaron Brooks and expect a 50 win season. Is Deron Williams a possibility? Perhaps. And it will cost a fortune if they can pull it off.

The bottom line is that the Suns need a few impact players to lead the role players they already have. How do you get them? Spend money, collect lottery picks.

I think there is plenty of skepticism as far as the front office is concerned. We don't know these guys (Babby and Blanks) and most people call Sarver cheap, although the numbers will prove that's not necessarily the case. I think the average fan will look back on this season and think about Amare leaving, the F/A signings that didn't pan out, and how there was little effort to find/sign that Amare replacement. So, um, I think the Suns braintrust has a lot to make up for at this point.

b. Since you know what it is like to see your team come oh so close to breaking through but not quite, what advice can you offer for both the Thunder fans and the Thunder franchise on how to break through the ceiling where the elite teams dwell?

I think in those contending years, the Suns had plenty of offensive fire power and chemistry on the court. What they always lacked was defense, rebounding, and of course there was the Spurs Horry hip-check game, the year Joe Johnson broke his eye socket against the Mavs, and David Stern's hatred for anything Suns related (partial sarc). The Suns had their chances, but there always seemed to be some soul crushing event that prevented them from reaching the promised land.

I like your squad a lot. You have your superstar in Durant whose getting superstar treatment (ahem, see Channing Frye shoulder separation), Westbrook, who can flat ball, and some excellent role players. It's encouraging seeing Ibaka making strides this season. I think the Thunder have a chance to make some noise in the post season. I would like to see Westbrook become a bit more of a playmaker and less scorer to get his teammates involved, but 8 per game is nothing to sneeze at.

These are exciting times for you OKC fans. Enjoy every second because inevitably you'll share the misery that we Suns and Jazz fans are experiencing.

We're pulling for you too, Wil. Yikes.