Kevin Durant: The Thorns in His Side

Share All sharing options for: Kevin Durant: The Thorns in His Side

During the 2009-2010 season, Kevin Durant had a coming-out party of sorts as, at a young and tender age of 21, he led the league in scoring and his team to 50 wins and a playoff appearance. This season has been a bit more choppy. If you look at his statistics from this season and compare it to last year's, you can see that generally speaking, Durant has not had as many "explosive nights," but also hasn't had as many clunkers either. There have been only a handful of games where the Thunder were completely out of it right from the beginning despite Durant's drop in production, and I think that is a testament both to the Thunder's progress as a team generally and Durant's development as a total player specifically. I do think he has struggled more offensively this season, and I still hold to the thesis that I first thought during the first quarter of the season.

My thesis is as follows:

Kevin Durant, at 22 years old, 6'9" and around 230 pounds, is not yet in the kind of shape that is required for an elite player to maintain his high level of play through a 100 game season.

Last year, Durant played in all 82 games plus six hard-fought games in the first round of the playoffs. He then played in the FIBA World Championships this summer, where Durant served as the best player on the gold medal team. In other words, he has played more meaningful minutes in the past 12 months than he ever has in his life.

As a matter of comparison, let's take a look at the five players who follow Durant in this year's scoring race:

So on average, Durant is about six years younger than the rest and nowhere near as physically developed. I have a hard time believing that the spindly Durant weighs 230.  If we take it at face value though, I raise this question: are Kevin Durant, LeBron James, and Amare Stoudemire physically similar? If you look at those three men, you can see that James and Stoudemire are physical specimens, but Durant is still growing into his natural form. Kevin will never look as sculpted as those two men, but he will eventually round out in his chest, shoulders, and legs.

So that is the problem - that Kevin Durant is not yet physically developed enough to maintain a high level of play over the course of a full season. He will continue to have ups and downs as he faces the competition.

Which leads me to the real point of this post...who is the competition?

In the abstract, Durant struggles against players who have:

Who is going to be waiting for Durant in the playoffs (if they started today)?

How has Durant faired offensively against these teams? 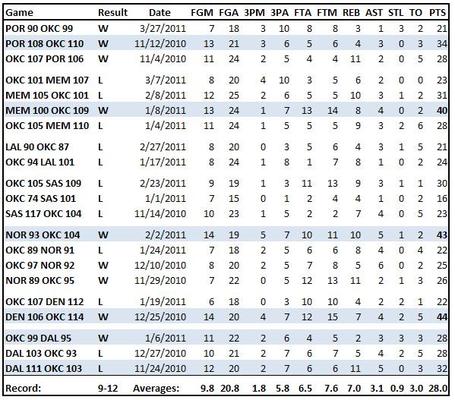 note: all stats provided by Hoopdata.com

Let us try to glean some things from this data set, which as of today is not entirely complete:

To conclude, I think that if everything holds to form and the Thunder meet the Nuggets in the first round, the series is going to hinge on this aspect of Durant's game. If he can discipline himself not to settle for those 16-23 foot jump shots, instead getting the ball a little bit closer to the rim, both he and the team will be much better off offensively. Hopefully the coaching staff realizes this as well and will create situations where Durant is at his most effective.