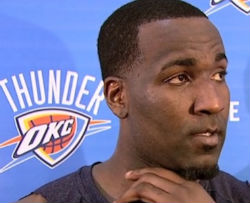 There have been a number of well-respected writers who have taken on the task of explaining how the Kendrick Perkins contract extension was designed. There isn't much more (if anything) for me to add, other than the fact that OKC management clearly knows what it is doing when it comes to structuring contracts within the overall salary cap structure. It isn't merely because the front office, led by GM Sam Presti, are very smart and very good at their jobs; it is also because they are forced to do it. OKC is a small market team that does not have revenue streams that cities like NY, Chicago, and LA do. So OKC has to do a better and more meticulous job in how things get put together; there is much less margin for error. As they say, necessity is the mother of all invention.

Analysis from across the landscape after the jump.

The Presti Plan in Action | NewsOK

This is the big-picture view offered by Darnell Mayberry. In the story he outlines both the philosophy and the method that Presti used to get the pieces he needed. The strategy reminds me a bit of the New England Patriots front office in how they frequently find themselves ahead of the curve in assets such as expiring contracts and draft picks. Every piece matters.

Hidden in this story is a little line:

"The trade, along with a deal that sent veteran Morris Peterson and D.J. White to Charlotte for Nazr Mohammed, cleared about $2.5 million in cap space for the Thunder this season and Oklahoma City decided to use it to sweeten its offer to Perkins."

Just as in the game of chess, every piece has a purpose; every move matters. I think clearing this kind of space to create a sweeter front-loaded deal is one of the reasons why players want to play in OKC. Just like with the Nick Collison deal, the gesture is one of good faith for the promise of a long-term commitment.

This post, dated on February 26, days before the Perkins deal was announced, essentially predicted the extension. Scroll all the way to the bottom to see how this guy quite accurately predicted how the Thunder would go about using the extra cap space to give Perkins both more money up front as well as more money per year, and doing so within their financial structure.

Perkins Signed to a Multi-Year Extension; Why Now? | Daily Thunder

Young points out that a key in the negotiation was the March 1st deadline; after that deadline passed, Perkins would have become a free agent. Consider the leverage: the Thunder could offer to bump Perkins' current salary up from $2.3 to $6.7 million with their extra cap space, and from that baseline they could then offer a four year extension worth almost $35 million.

Tacked on the very end of this story is another facet to the Thunder's leverage - nobody knows what the future of the NBA holds or what will be in the eventual Collective Bargaining Agreement. By getting the deal done before Perkins hit free agency, there will not be any uncertainty for either party as to what will come when the rules change.

Is Perkins worth almost $9 million per year? In the question of value, one element remains constant - centers get paid (see Brendan Haywood). If you find a true center who is competent, he is eventually going to demand a high price tag. Also, in the question of what comes next, the Thunder are planning on the upcoming negotiations for Russell Westbrook, James Harden, and Serge Ibaka. By removing Perkins from the fold of uncertainty, the Thunder can claim in earnest that he was dealt with in a way that benefited both team and player. The younger guys will likely be looking at more restrictive deals and less leeway, but again, the Thunder can still say they are negotiating in earnest because of the rule changes.

Dwyer lays down what is really remarkable about the Thunder's positioning. It may or may not benefit them in 2011, but:

The point is 2014, or any of the years before it, and a chance at pulling any series off against the Mavericks, Lakers or Spurs in 2011. The Mavs, Lakers or Spurs can claim to be on par or better with the Thunder in that regard in 2011, but there's no way in hell they can pretend to be in place to do the same in 2014. Sam Presti is having his cake and eating it, too. And his future cake. Rocket-boosters and everything.

That seems fitting - if the Thunder ever have the fortune of raising a banner, rocket-booster cake will probably be served by Rumble and Presti. Nuclear ice cream, too.