Kevin Durant, 22 year old NBA superstar and lynch pin of the Thunder, is wealthy. In a year's time he will begin the course that sets him out to be among the NBA's super-rich when his salary will more than double. He appears to live an understated life, as he often remarks that his daily living consists of basketball, family, and video games. So to celebrate his newfound wealth, apparently he has splurged on a new ride.

KD is a Man of Simple, Yet Refined, Tastes | Spurs Nation 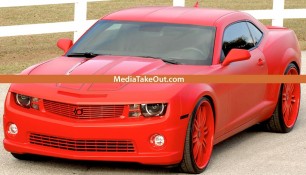 That's right, Kevin Durant, the future of the NBA, is tooling around in a Chevy. I do wonder if they'd have to cut out the floors just so he can squeeze in his near-seven foot frame.

I think we can at least agree that the new tricked out Camero is a step up, style-wise, from his previous purchase of a conversion van.