OKC Thunder Remaining Record: Where Will They Finish?

Share All sharing options for: OKC Thunder Remaining Record: Where Will They Finish?

I took a quick look at the Thunder's remaining schedule this year. If you tally up the opponents, you can see that they have 14 home and 14 away games. The average winning percentage of their opponents is 0.478. If you extrapolate the Thunder's current winning percentage of 0.648 across the rest of the season, you get an additional 18 wins, or a final record of 53-29. Through virtually no mathematical method at all except for what I personally know about each of the remaining opponents (read: very little), I attempted to get to those 18 wins in as reasonable manner as I could. I have the Thunder finishing very strong at home, only losing one game (vs Portland, who has been playing well as of late). An 18-1 home record is probably too ambitious, but I wanted to start there as a baseline.

In looking at their road opponents, I highlighted a few road games that are most definitely winnable. Could they potentially flip some of those road games in their favor? The chase for the Lakers is on; every game will matter.

See the chart below. 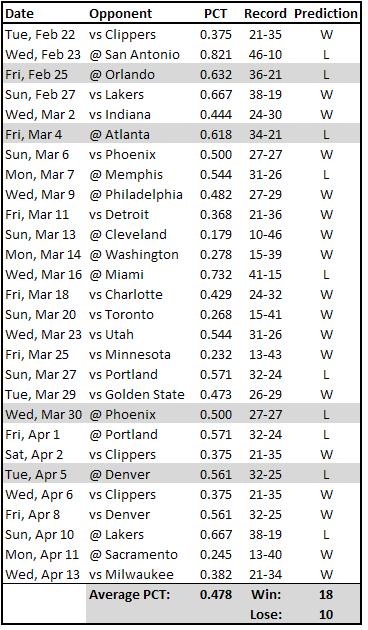 Is a final record of 53-29 the most realistic? Or can the Thunder reverse some of those bad losses to inferior teams (Clippers, Raptors) that still hang like an anchor from vaunting them to the next level of competitiveness?