Kevin Durant, Russell Westbrook Head of the Class at Thunder U

Share All sharing options for: Kevin Durant, Russell Westbrook Head of the Class at Thunder U 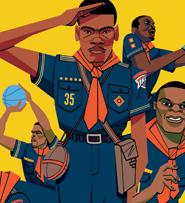 Bethlehem Shoals, the FreeDarko legend and NBA savant, has just had his work published in GQ Magazine, and front and center is his study on the OKC Thunder.

Shoals once again does his best job to, in a way, imagine what the NBA looks like if it were suddenly visited by extra terrestrials. While the story was written much earlier in the season, you can still see the traces of what Shoals was observing.

There is one particular passage that Shoals writes, almost as a throwaway, but which in my mind not only typifies his subject Kevin Durant, but embodies most of the other guys as well:

Five days after the Celtics loss, the Thunder have a nationally televised tilt with division-rival Portland. When the ESPN camera rears up to get some candid pregame footage, Durant unleashes a wobbly but confident gyration that makes his arms sway like reeds in a breeze. He has grown since he came into the league, and sometimes he moves like he's still getting used to his body. The dance, which gets recycled on SportsCenter late into the night, plays up this awkwardness.

I honestly don't remember this moment where Durant was dancing, but I can easily visualize it in my head. It reminds me of the scene from the movie "Spider-Man" where Peter Parker first realizes he has superpowers, and then spends lots of time trying to figure out how to use them. He flings a web across the room to grab an object, but instead of snapping it back and grabbing it, the thing smacks him in the face. Parker later attempts his first web-swing, but he mis-judges the distance and swoops right into the side of a building. For all his many natural talents, Durant still isn't yet comfortable in his own skin in the same way that Stephen Curry or Zach Randolph is. Those two guys are acutely aware of what they are physically and proceed to maximize their physical impact. Kevin hasn't yet finished growing; once he fills out and puts on another 20 pounds of girth and works on his rebounding game, he'll be able to generate more offense more easily. He doesn't know that yet though; he hasn't yet figured out what his body can do for him. Perhaps that is what is most scary - Durant can average 30 with single defenders taking away a good chunk of his game. In two years, defenders won't have that luxury. In two years, Kevin will be learning how to not just dominate his man, but an entire defensive set as well.

In a similar way, Durant's growth in self-awareness falls upon all of the Thunder youth. To wit:

Russell Westbrook: He has the explosiveness of Derrick Rose and the agility of Rajon Rondo. When I watch Russell Westbrook shift into, for lack of a better term, "GO" mode, he looks like a running back on a football field that shifts into fifth gear. He smokes the merely "quick" players, bounces off the bigs, and finishes with a LeBron-esque fury, if James were five inches shorter and 60 pounds lighter. Rather than be like Spider-man, Westbrook is like a mini-Hulk. He attacks in a rage, and each time he finishes strong he lets lose a primal scream. He then turns around, smirks at his teammates, and looks for the next opportunity to do the same thing. What he must learn is that the Hulk can't always just SMASH. GO mode is dangerous because it produces both ESPN highlights and eight turnover games. There is often collateral damage. Westbrook has to learn, like an elite running back, that there is a flow to the game. If he can find the proper channels and lanes to swim in, nobody will catch him.

Serge Ibaka: Over the first half of the season, I thought to myself that Ibaka has the potential to be an Antonio Davis or P.J. Brown kind of player - the guy that teams pursue to get themselves over the championship hump. I think I under-sold Ibaka though. While he is still green in the ways of playing superior position defense and rebounding, he already has the physique and raw skill to get there. What he does have now which neither of those guys did is a soft shooting touch that is very consistent out to at least 15 feet. As of late Ibaka has added a turnaround jumper, and I know, I just know, he's got a jump hook somewhere in there as well. With the right tutoring and additional minutes, Ibaka has an upside of being a #2 banana averaging 19 and 12 with a couple blocks and a couple airplane wings per game.

Just keep him away from the Dikembe Mutombo offensive big-man camp.

James Harden: We know that James can send it down. We know this. Sometimes though I wonder if James himself knows this. I look at Harden and I see a guy practically bursting at the seams to let loose, both personality and talent-wise, and yet he is respectfully deferential to the older guys on the team - Durant, Westbrook, and Jeff Green. I get that, and I admire that. What it means is that when Harden is playing with those guys, they are going to have to show him confidence and trust. That's mainly on Westbrook. However, when Harden is helping run the show with the second unit, that is when it is his time to shine.

If Westbrook is the tailback, then Harden is the wide receiver. There was a moment in a recent game where Harden beat his man off the dribble, easily drove to the rim, and missed the shot. However, he quickly grabbed the rebound, but instead of going up strong again, he looked for an outlet. He didn't find one, so he dribbled back out to the 3-point line. Jarden turned, and then beat his man off the dribble again taking it to the rim. This time though there was help defense and they drew a charge on Harden. He can do these things. It is just a matter of him trusting in his abilities, because they are as natural and selfless as anybody else's on the team.

D.J. White: Mr. White has received limited minutes so far this season, and he's not likely to have much of an impact going forward unless/until the Thunder start to tussle with a team like the Lakers and Ibaka and Nick Collison foul out against LA's bigs. He plays soft, doesn't always know where to go, and is young. What Mr. White does have though is size, length, and a ever-so-soft jump shot. We see it any time he get in the game. At some point, the Thunder are going to need him to be at the ready. He is no hobbit, although sometimes it seems like he thinks he is one.

Thunder U. graduation is right around the corner.