Yesterday, the Thunder hosted their first media day which allowed for press access to the team and players. While normally this type of thing would be an exercise in tapioca pudding level excitement, the team did have some interesting things to say. Royce Young at Daily Thunder provides a complete analysis of the big day, so make sure to check it out.

Westbrook Not Worried Over Deal | ESPN

Russell Westbrook is not worried over his next deal. Which of course means that he is going to be asked about it ad naseum for the next six months.

5-on-5: What About Chris Paul on the Thunder? | HoopSpeak

Beckley Mason, stirrrrring the sauce pot. Breakfast burritos for everyone.

Presti swung a small but potentially valuable trade, sending Robert Vaden to the Timberwolves in exchange for Lazar Hayward, a 6'6" small forward who could potentially act as Kevin Durant's backup.

Getting to Know Lazard Hayward | NewsOK

He seems to have the right attitude, at least. Probably his best move at this point is to work on building great rapport with Eric Maynor.

Let's take a break from the Chris Paul drama and check out the other big fish, Dwight Howard. New Jersey, eh? How does Superman feel about working for the President of Russia? (That would make a pretty great comic book)

Aaaand...we're back to Chris Paul. The Lakers appear to still be in talks with the Hornets in a Pau Gasol for Paul trade. How is this better than the original trade offer?

There are many inner-working mechanisms that are going into play. Somehow, some way, I'm sure Dikembe Mutombo is involved.

Nene Hilario re-signed with the Nuggets in a 5 year, $67 million deal that seems quite shockingly...fair. Enjoy those endless string of 15 and 8 games, guys.

What Ever Happened to the Triangle Offense? | Grantland

Too many right angles in a roundball world, I suppose. Consider this anonymous coach:

"When I look at Oklahoma City, I see a team that is built to run the Triangle. They are so designed to run the Triangle that it's almost a joke. Imagine them running a two-man game on the weak side with [Kevin] Durant and [Russell] Westbrook. Who the @$*! is gonna stop that?"

The MisAdventures of David Stern | Grantland

Sports law attorney Gabe Feldman is back to try to uncover what exactly has happened with Commissioner Stern.

Mayberry walks you through the way Sam Presti navigates rough waters when he is pursuing value.

Scottie Pippen Is Suing Everyone | Deadspin

The WTLC official position on Scottie Pippen is that as far as we know, he sits atop a giant pot of gold next to Lucky and the friendly residents of Mobile, Alabama.

Snark aside, from a business standpoint, if you know people will pay, then WHY lower them?

Maybe the ankle bracelet would have been better after all.

Given Howard's penchant for kindness, this may not be a bad way to go about it. Just keep Vander Weide away from the laughing gas.

Can We Accept LeBron as a Choker? | HoopSpeak

The body of evidence is both incomplete and ambivalent. In the end, we see what we want to see. At least LeBron James' nickname isn't "Mailman."

All the News Fit to Upload | Basketbawful

Evil Ted takes us through team web sites. Be sure to check out the Nets; everything becomes more clear.

Kwame Brown signed a one year offer with the Warriors for $7 million. There goes that man again.

Which explains the story directly above, though not this quote:

"I also find [JaVale McGee] to be erudite and well-read and highly relevant. I like him a lot!"

At least it seems that way, unless Mo Williams was trying to discreetly send direct messages to his college's arch rival.

Lastly, the perfect gift for the man who has everything, I give to you, the Wenger 16999 Giant Swiss Army Knife. 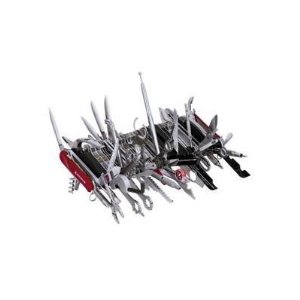 The comments are the best.