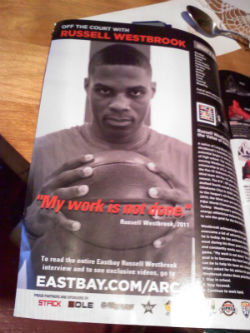 Russell Westbrook is currently a featured athlete at Eastbay, an athletic apparel superstore. I was tipped off to this via Westbrook's own twitter feed, which had a link to the picture to the side here.

Following the lead, if we go over to Eastbay.com/arc, we see that Westbrook has a number of cover images and videos available for our perusal.

Westbrook has mostly kept things on the down-low during this lengthy off-season. Aside from the occasional charity game and UCLA class, we haven't seen much from him. From what limited exposure we've had to Westbrook the individual, he seems to be on the quiet and more introspective side, so it was surprising to find out that he was willing to be a spokesman for Eastbay.

Follow the link to see some of his cover photo outtakes, as well as some behind the scenes video where Westbrook talks about his upbringing, his attire preferences, and how you too can look like Westbrook when you're trying to dunk a basketball.