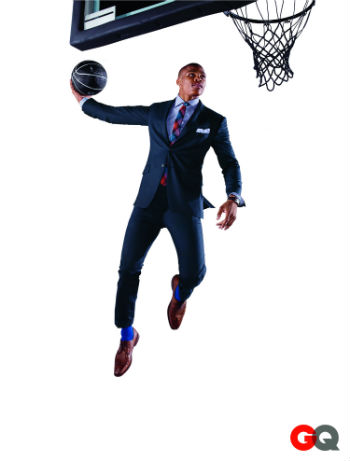 Bethlehem Shoals takes to the pages of GQ Magazine once again to explain how in the last year we've had a dunking renaissance. Blake Griffin has led the charge with his Dr. J-like assault on the rim, but coming along with him are other guys like Russell Westbrook and JaVale McGee who historically have not been grouped with the high flying prototypes.

Westbrook joins McGee, Griffin, Shannon Brown, and Andre Iguodala to show off some fine threads while making us all feel a bit more envious of the rafters they have reached. Given that Westbrook's standard attire during the lockout was a red hoodie and jeans, Prada suits are, dare I say, a pretty big leap.

In the Jordan era, the iconic dunker was typically a shooting guard or small forward who was about 6'6" and 190 pounds. He was tall but not too tall, lest his airborne acceleration seem too much a function of his length and not physical ability. He could contort himself in the air in a way that seemed to defy gravity, and more importantly, he could dunk on bigger players.

While the NBA still has its fare share of guys like that, physical anomalies like Westbrook are starting to crop up, and their assault on the rim is viscerally captivating.