A Look at All of the Current KD IV Colorways, With Release Dates (Nerf, Year of the Dragon, Blackout, Weatherman, Cool Grey)

Share All sharing options for: A Look at All of the Current KD IV Colorways, With Release Dates (Nerf, Year of the Dragon, Blackout, Weatherman, Cool Grey)

The lockout may have slowed down a lot of things, but Kevin Durant has been hard at work. Or, at least, the guys at Nike have been hard at work designing some cool new colorways for his shoe. If you aren't aware, the release date and launch colorways have already been announced. Without further ado, let's jump right in and look at these new designs. 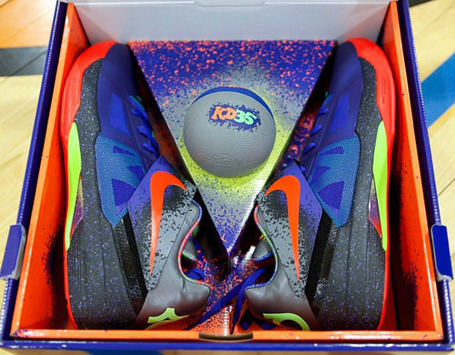 Analysis: These colorways harken back to a simpler time. Namely, being a kid in the early 90s, when virtually all products were marketed to you on TV with bright neon colors. One of the more notable brands was Nerf, which encouraged sibling rivalries everywhere by stocking kids with bright, colorful, and occasionally dangerous toy guns. Of course, the gray base for the shoe has given this pair of shoes a more modern look. Still, the original desire remains.

Grade: A-. Cool, but I wish they would have gone all out with the shoe.

Below: Year of the Dragon, Blackout, Weatherman, and Cool Grey!

Year of the Dragon Colorways 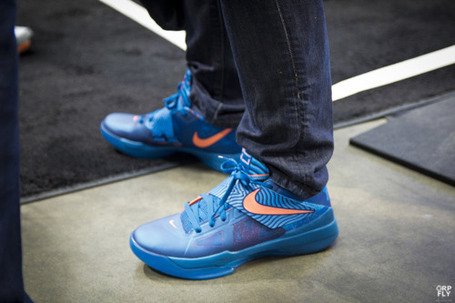 Analysis: As this sneaker is commemorating the Chinese "Year of the Dragon" in 2012, I would expect a release no sooner than January 23rd. The sneaker is an experiment in simplicity, with the signature "strap" of the KDIV featuring a purple and blue zebra print, and the remainder of the shoe mostly remaining a metallic blue, with some purple parts and an orange swoosh.

Grade: C-. It's alright, but it does a poor job of relating to it's name, and nothing makes me really want to buy this shoe. 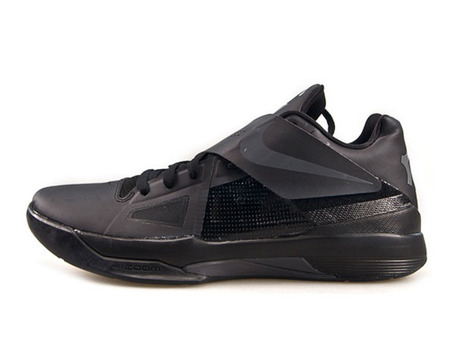 Analysis: Black, black, black, and more black. It's so black, that's it's a blackout! There's no white in these shoes. Unless you wear white socks with them.

Grade: B. It's solid, and a necessary colorway according to today's current trends, but it's not very original. 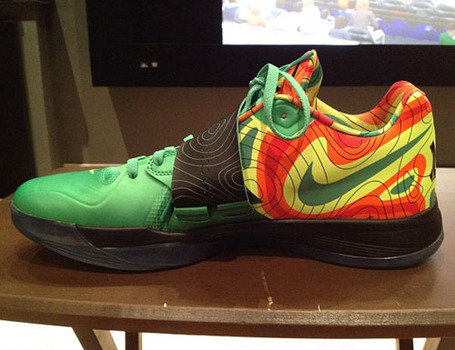 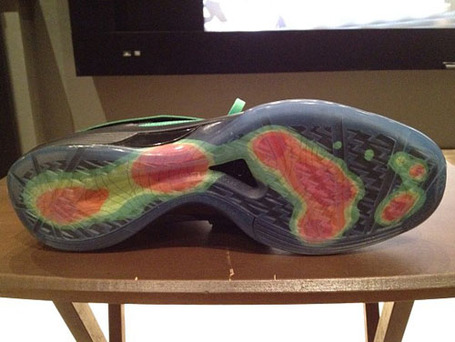 Analysis: These KD IV's are purported to be KD's personal favorite. And these shoes are SICK! They start with a base lime green/teal colour, and expand into different colours and lines, as you would see in a old school weather radar map.

Grade: A+. You can't ask for more out of a shoe. Creativity, originality, outlandishness, and a definite "wow" factor. 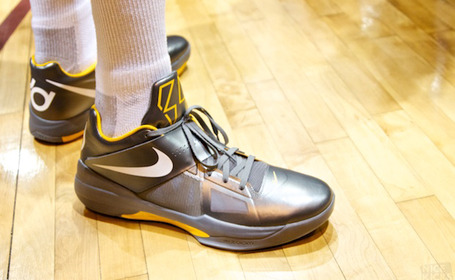 Analysis: These shoes have a metallic grey base, with some yellow mixed in for good measure. The font used for the 35 reminds me of 1950s radioactive safety campaigns, but maybe that's just me.

Grade: B+. Definitely a unique approach. If you look hard enough, it kind of looks like a pair conservative New Balance shoes, but there's just enough in this design to keep the conservative approach while looking fresh at the same time.

What do you think of the new KD IV Colorways? Vote in the poll, post a comment!