One of the more provocative questions that has continued to float through the NBA lockout debate is this, how can owners truly be hurting financially if teams are being purchased for hundreds of millions? How can owners be fighting over single percentage scraps if their franchises are worth $300 million dollars or more?

Way back in January, in one of the first financial posts I ever wrote in this space, we examined the value of NBA franchises as compiled by Forbes. Here is the table I created based on Forbes' numbers: 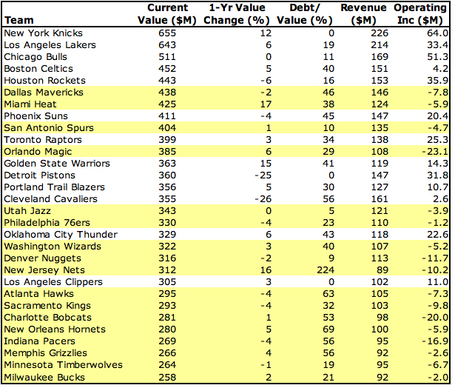 As I wrote in that post, the number of teams that carry a heavy amount of debt is kind of alarming, particularly because of the potential risk it brings during a down economy. Debt tends to choke off cash supply even when a company is doing well. The reason why is because debt payments are a contractual obligation. Regardless of whether a company is doing really well or really poorly, those debt payments have to be made, lest the company default on their loans and introduce all sorts of unpleasant consequences. Knowing this, it was with great interest that I read this story:

The latest round of franchise purchasing has had a common feature - the new owners used a lot of debt to do it:

The more recent buyers of NBA teams in some cases paid almost 20 times their predecessors -- and in one case 500 times -- taking on debt when the growth in franchise values is slowing.

From this line alone we see three elements that brew disaster:

What happens when you buy a new asset with a loan, and suddenly that asset doesn't produce as much money as you thought, and your loan payment is coming due? You get nervous.

The resolve of owners looking to recoup their investment is problematic for NBA Commissioner David Stern, who is negotiating on behalf of a group that doesn't agree on how much of the league's $4 billion in annual revenue should go to the players, says Steve Mills, 52, who represented the New York Knicks during the 1998-99 collective bargaining talks.

The owners are sitting on very expensive assets that, while increasing in value (albeit slowly), it seems as if the assets are not producing enough cash flow for the owners to feel good about paying their debt obligations.

Owners in 1999 tolerated annual losses because so many were debt free and the values of their franchises were skyrocketing, Mills said. That allowed Stern to win widespread support for his contract offer to players, something he hasn't been able to achieve this time.

And there you have it. NBA franchises have always been a cash burning machine in order to put an entertaining event. The difference though between the last lockout and now is that in 1999, teams did not have nearly as much debt on their books. As a result, those teams, despite showing accounting losses, likely did not have nearly as much cash flow running out the door. As long as those 1999 franchises' cash flow was strong, they could continue their operations (even if those operations showed annual losses) and enjoy increased franchise values.

If we fast forward to the present day, it is far more likely that teams' cash flows are negative. A company can show a paper loss and still operate quite nicely as long as they can pay their bills; however, as soon as the cash starts running out, that's when companies find themselves in trouble. Cash is what is needed to pay debt obligations and other (player) contracts. High team valuations can't pay bills. Team jets can't pay bills. All the basketballs in the world can't pay bills. Rather, cash...C-notes, Wilsons, and even even the Loonie (for our Raptor friends) is what pays the bills. When the cash starts to run out, the owners get nervous.

I think this concept crystallizes a bit the situation in which the NBA finds itself, fighting tooth and nail over single BRI percentage points. We know that 1% of BRI equates to about $40 million. What's the big deal, we say. $40 million seems like it is peanuts compared to the other systematic issues. I think it is a big deal because the evidence indicates that many of these teams are starved for cash, and now that they've gotten a whiff of some more of it, they are going to pursue it to the end. It isn't that the teams simply want more money. Everybody wants more money. Rather, because of the financial position the teams have placed themselves, owners need more money. And it just so happens that, through this lockout, they can get it.