Update: Darnell Mayberry at the Oklahoman also did some calculations, but instead of just taking an average like I did, he calculated it on a per-game basis. Check out his analysis to see how it compares.

NBA players on Monday unanimously elected to reject the owners' final offer and have the union disclaim interest on Monday. If you're among the working stiffs like me, you might have noticed that yesterday was 11/15, commonly referred to as "payday." So yesterday came and went, and for the first time in what may be a long time, a small group of high (and some very, very high) wage earners felt the sting of not receiving a paycheck.

The players' resolve during this legal battle is going to be tested, and this is the first way in which it will be tested: 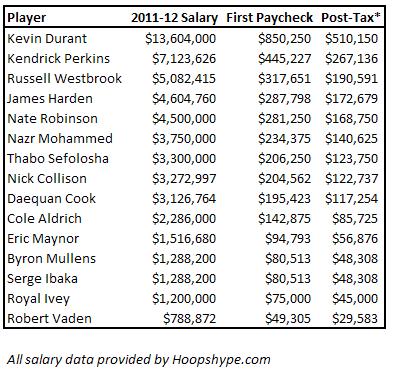 (*I chose a tax rate of 40%, because, why not? I figured that would be inclusive enough to account for income tax, pension, escrow, agent fees, and the like)

Kevin Durant, you may recall, receives endorsements that total about the same amount as his expected salary (about $14 million) so Kevin has ample secondary income to carry him for a while. I also expect that Russell Westbrook has a little bit of residual income (Ozarka!), and it isn't unreasonable to think that guys like James Harden, Kendrick Perkins, and even Nate Robinson might have some small endorsement deals. However, how is it going to feel tomorrow when that six figure check DOESN'T clear their bank account? How is a guy like Daequan Cook going to feel when in three months he's lost 3/4 of a million bucks that he is probably never going to be able to make up again? How are guys like Cole Aldrich going to feel when they have to start paying out legal fees that won't see even the possibility of any monetary return for several years?

Guys like Derek Fisher kept saying that the players have been prepared and they have been saving up in order to deal with this lockout. Apropos of nothing, right now, the average length of national unemployment is about 40 weeks. Have the players saved up enough to be able to weather a storm that lasts this long? What about 80 weeks?