Kevin Durant Went Looking for a Flag Football Game: "Can I Play?"

Share All sharing options for: Kevin Durant Went Looking for a Flag Football Game: "Can I Play?"

Kevin Durant, earnest as ever, was bored on Monday (No celebrity Halloween party invitations? Or maybe he just didn't care) and he went looking for an opportunity for some physical exertion:

Given that Durant has more than a few followers on Twitter (over a million), he soon got an invitation from a college kid named at Oklahoma State University to play in a championship flag football game in Stillwater, a location that was two hours away.

Amazingly, amazingly, young George had an open roster spot for Durant. And then this happened:

Honestly, there is nothing more I can add to this story to enhance the remarkable way in which Durant continues to connect with the people around him. It is as if Durant is living out all of the most sentimental aspects of the best sneaker commercials, instead of just acting in them.

"It's weird, but I think it's a good time for myself and the other guys to really find out what we're all about. Most people view us as just basketball players, and we can use this time to learn about ourselves and explore things that we wouldn't have the time to do if we were in season." - Dwight Howard

As Durant has undoubtedly learned more about himself, so too has he allowed many others to get to know him in a personal way as well.

Be sure to check out this Oklahoma City University blog to get the full coverage from the eyes of the kids themselves:

I grabbed a couple of their images as well and posted them after the jump, along with another short video clip. 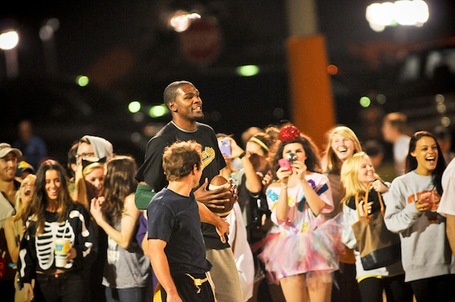 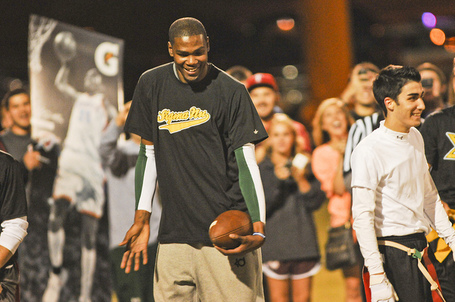