Share All sharing options for: Bob Barry, Sr. Dies at 80 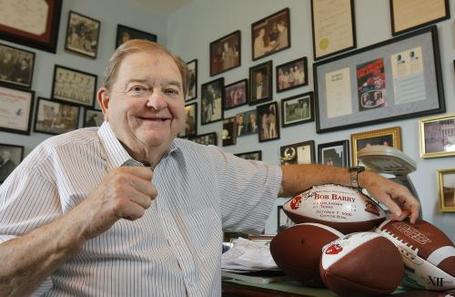 This isn't Thunder-related, but I figured it deserved a mention. Bob Barry, Sr. was the radio voice of OU Football and Basketball over the past several years, and also worked at the sports desk for local NBC affiliate KFOR. He is the father of Bob Barry, Jr., who often discusses the Thunder on his radio show, Sports Morning.

Much has been said in Oklahoma about Bob's death, and there's been nothing but overwhelmingly positive comments.

I don't have any awe-inspiring Bob Barry story, but you could say that he was part of my falling in love with basketball, as I clearly remember him providing the post-game for the OU Basketball I saw in the late 90s. I have many memories of driving home with my dad as I heard him list the amount of points Eduardo Najera scored or interview Kelvin Sampson. I'm sure those of you who are from Oklahoma have similar memories.

In the sports reporting business, there's lots of people who have massive egos or care way too much about their own self-image. But there are few who are as real and positive as Bob Barry, Sr. That's something I'll definitely miss, and something I try to strive for myself. Rest in peace, Bob.