Kevin Durant has been using the phrase "basketball never stops" all summer long, when basketball - or at least organized by the league basketball - was indeed stopped.

So when Durant decided it was time to organize a charity game in Oklahoma City with all his closest buddies from the NBA, fans jumped at the chance to support the sport they've been craving since being knocked out of the playoffs by the eventual-champion Dallas Mavs.

Thunder Nation flocked next door to the Thunder Dome, to fill up the Cox Convention Center with 12,874 fans. Along with the host with the most Kevin Durant, Thunder players James Harden and Russell Westbrook suited up. Former teammate Jeff Green brought a reunion of the Broingtons back to OKC.

Chris Paul, who still fondly talks of the Hornets time in the city, captained the Blue team. He was joined by former KD teammie in Seattle and Oklahoma, Damien Wilkins, on the squad coached by Desmond Mason. To top off the OKC reunion tour Daequan Cook and Eric Maynor were sitting courtside to soak in the action. And to preview the future, Thunder rookie Reggie Jackson took the spot of Monta Ellis on KD's team bench to make it a regular 'family affair'.

"Once I put this game together I knew it was going to be a hit, especially for the people in Oklahoma City who enjoy the game," Durant opened his post-game press conference with. "I'm excited I got this opportunity to do it. A lot of people came out to show love.

"All the players that came didn't have to. Sacrificed their time to come play the game. We just wanted to show the fans that we still love them and we still want to play no matter what. So, I was happy with the turnout."

Those players making sacrifices were quick to invest their time into the event, particularly due to the organizer himself. Wilkins, who spent time in Oklahoma City as a player didn't have any hesitation in participating in the event. 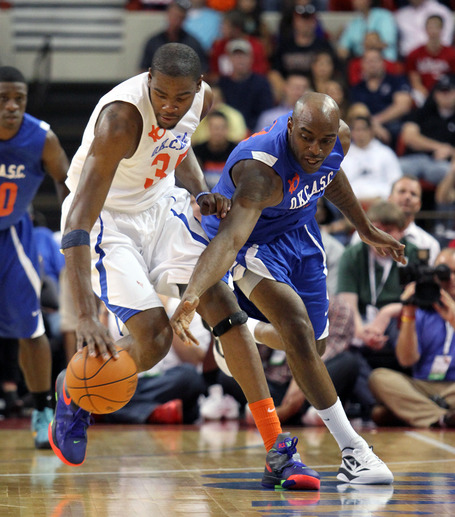 "KD's my man," Wilkins said. "We were teammates together in Seattle, I was there whenever he was a rookie and we came here together so it was a no brainer. Oklahoma City definitely got some of the best fans in the league, so we knew that they were going to be here and show their appreciation for good basketball. KD put on a great show, so I was happy to be here."

Green was glad to be back in the city that he left due to a midseason trade in 2011.

"It was great. I've been with Kevin whenever he's in town and it was just great to come out here and just put on a show like we did tonight," Green said after the game. "I saw a lot of friends, a lot of people I knew when I was down here so it was cool."

Harden took an almost nostalgic tone as he talked about Oklahoma City. He looked over his shoulder in the direction of the Chesapeake Arena and summed up his emotions about the city before voicing his desire to end the lockout.

"I miss this place. To see the fans and the support we have out here, it was just unbelievable. I had flashbacks and memories but hopefully we can get this lockout over and get a deal done so we can go back out on the court."

He also gave props to the hometown crowd. "Unbelievable, as usual," Harden noted. "All our home games they're cheering, they're faithful, they're there every game. So just to have them and see them, like I said, brings back memories."

Durant gave a lot of credit to Oklahoma State's pride, Desmond Mason, in getting the event off the ground. Mason, who lives in the Oklahoma City metro after hanging up his sneakers played an integral piece in the organization of the invitational.

"Once I told Desmond Mason that I wanted to do a game, he kind of handled everything for it," Durant said."He kind of got everybody up, got everybody excited to come to the game ... A lot of people helped me out and made things go smoothly, so I'm glad everybody enjoyed themselves and hopefully we can get something going across the street at the Chesapeake Arena soon, so we'll see." 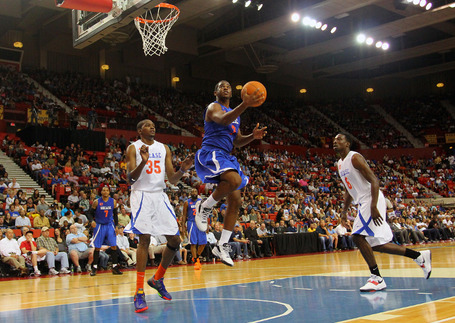 Chris Paul had a homecoming of sorts from his time when the displaced Hornets filled the Ford Center and put the city on the eventual path to franchise ownership.

"I talk to KD pretty often, so he knows how I feel about Oklahoma City," Paul said. "It's always fun to come back here."

But it's more than the city that drew Paul and others here to play for charity, it's their mutual respect for the man himself - Kevin Durant.

"KD expressed to you guys too, it's unbelievable - guys don't get paid to play in these games. You know what I mean, guys come out here because of how much respect they have for KD, and what he does for the community and for kids and giving back. It's all about what he's doing and guys want to come out and be a part of that."

A big thanks to all 14 players that made their way to Oklahoma to ensure that basketball never stops. Even if the owners say it does.