When the news broke that the NBA and NBPA were submitting themselves to an independent mediator, we collectively perked our ears up because such a move seems to be an admission that the negotiations are too broken to move forward without outside assistance. NBA.com's David Aldridge wrote an in-depth report on the developments, and one of the things offered as almost a throwaway was this information he extracted from NBPA head Billy Hunter:

Hunter also said the union would be willing to discuss reductions in roster size from the current maximum of 15 down to 12 players, or allowing "split" contracts that would allow teams to send players down to the NBA Developmental League during the season if they thought the player needed work he wasn't getting in the NBA.

"We've already indicated that we'd have discussions about the size of the roster," Hunter said.

Perhaps the media has already been over-saturated with angles that can be taken with this lockout and adding another wrinkle plunges us deeper into the labyrinthine Fire Swamp that we are beginning to be afraid we'll never escape. Even so, this little bit of information is interesting to me because it seems that it would 1) be a major concession of the players to simply dismiss potentially 20% of their work force; 2) it could potentially save a lot of money; and 3) barely anyone seems to care. So at the risk of completely mis-reading #3 (which could potentially be, "nobody cares because it isn't important"), it seems like a worthwhile exercise to dig in a bit and examine the kind of impact that roster reduction could have.

(As an aside, it does bother me slightly that Hunter made the comment in such a glib, off-handed manner. If something like roster reduction is on the table which could involve dozens of players suddenly finding themselves out of a job, I think it should have been a little more front and center.)

In order to see what kind of money could be in play if roster spots were eliminated, we can do a bit of break-even analysis. This break-even point exercise is probably more academic than practical, and involves a number of assumptions that are most certainly wrong, but I think it at least gets us thinking about how rearranging the deck can change the parameters of the debate.

We start with a few assumptions that are undoubtedly wrong but it just makes it easier to work through the math:
Number of teams: 30
Number of current players per team: 15
Total number of NBA Players: 450
Last year's BRI: $3.817 billion
Given a roster change from 15 to 12, total roster spots eliminated: 90

In math class, we learned that to get an average, you just divide one cumulative number by the number of things that comprise it. Or, for analysis sake, if we take last year's BRI of $3.817 billion, take the 57% players' cut and divide it by 450 players, you get an average salary of about $4.8 million per player.

You also might recall that when league officials cite the average salary of players, it is a little bit higher. The reason why is because the league uses a specific calculation which can be found at Larry Coon's FAQ. For the purposes of this analysis, I'm going to go with a straight average number because at the end of the day, it doesn't really matter where we start.

Based on last year's final BRI and applying the range of player percentages that have been discussed, we start with this chart: 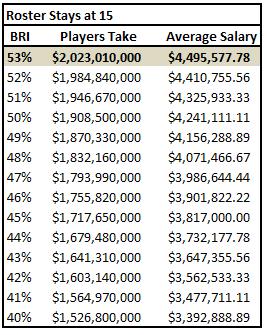 If we start at last year's BRI but instead apply the 53% player split, as they have publicly demanded as their absolute floor, you can see that the average salary would decrease from about $4.8 million to $4.5 million. You can see that if you reverse the split and give the players 47% as the owners would like, it would cost them about $600,000, or 13% of their average salaries.

If we reduce the roster size by one player, this chart reflects the result in our averages: 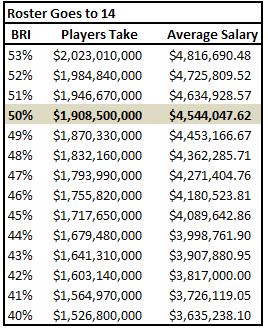 You can see here that by eliminating just one player from each team's roster (30 in total), it increases the personal stake each player has in the league's revenue considerably. Now, the players only need to take a 50% cut to get almost the exact same average salary as if they took 53% with a full roster.

At the next level of roster reduction where two players are eliminated, which removes 60 spots league-wide: 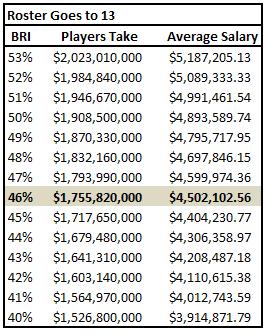 By eliminating two spots, the percentage that players would need to take the same amount of money now dips below even what the owners are looking for. The precise break-even point here is 45.9%. 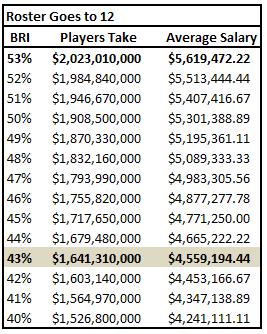 Under this final scenario, the players see their percentage fall all the way down to 43%, which was one of the percentages floated early on by the owners, and even then they would still manage to come out ahead. The break-even point here is: 42.4%.

The net effect of this reduction in roster spots is considerable and it underscores the fact that the talent pool in the NBA is small but receives a kingly equitable proportion simply because of the amount of money that is made. The reduction of but 6.7% of the league's roster has a dramatic effect on each player's slice of the pie. By the time we wind down to Hunter's casual comment, if the players were to actually acquiesce to a roster reduction, they would still make more on average than they did in the previous season, even at a 46% stake in BRI.

Let us put aside all of these charts and calculations because we know they're not actually based on reality. We know that the league is not made up of 450 players who each make $5 million dollars; rather, there are a handful of "max contract" players, a hundred or so players still on their rookie contracts, and then a bevy of players who fall somewhere in between.

Instead, let us consider a more realistic method which I shall refer to as the LIFO method. LIFO is a method of cost accounting that means, "Last In, First Out." Or in other words, the last men on the totem pole are the first ones to get the ax (please go easy on me accounting geeks; just grant me the use of this pneumonic for a spell to make my point). In other words, if the Thunder had to reduce their roster from 15 players to 12, it is likely that the kind of guy who would get cut is a player like Byron Mullens ($1.3 million), not Russell Westbrook ($5.1 million). Using an average salary reduction likely overstates the impact of roster reduction and potential savings. A more useful way to consider it is to look at the cheapest players and see what the savings floor might be.

If we apply some of the statistics from the great ShamSports' site and do some back of the envelop math calculations, we can figure out how much money would be saved if we simply took off the bottom 90 players.

Clearly, these numbers are far removed from our average calculations, which would have yielded us with $150, $300, and $450 million in savings, respectively. It does however help create a lower boundary, as compared to the average salary calculation's upper boundary. This is because the truth is, the cheapest players aren't likely to be eliminated either, since many of those players are playing on rookie salaries which grossly underpay them (for example, Serge Ibaka made a paltry $1.8 million last season because he's still on his rookie contract).
Conclusion
I am not sure how realistic it is that the NBPA is actually putting roster spots on the chopping block of CBA negotiations, but if we are, then here are a few tentative conclusions:
***
A great many thanks to two of the smartest guys in the room who inhabit the virtual space at 8 Points, 9 Seconds who helped me develop this analysis.