As you might know already, some teams designed alternate jerseys for this season, and they have been leaked via NBA 2K12. (First Seen at The Basketball Jones)

But since I don't have anything better to do right now, I figured I'd rate the new jerseys, just as I did for last season's new jerseys. Except that these are just alternates, and we might not get to see them again until next year. Onward! 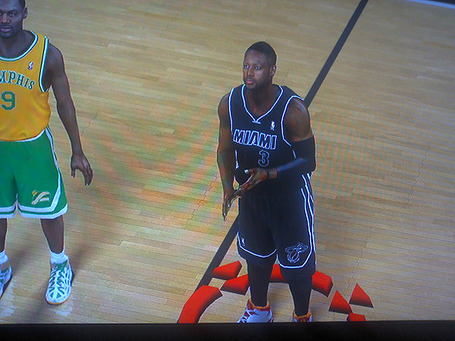 Analysis: The Heat have basically taken their existing uniforms and blacked them out wherever possible, outlining all of the details in white.

Opinion: The Thunder did a similar thing with some jerseys they started selling last year, and I have to say, it's a nice design, and it's nice to see that Commissioner Stern is finally relaxing his "no black" rule. And given that Miami does a "white out" sometimes with their fans, it's nice to see white outlining everything, like a "white-hot" heat on the black jerseys. And given that the Heat are the "villains" of this era's NBA, it's kind of cool to see them in black. All of that being said, I think that it wouldn't have hurt to throw in some yellow or red just to distinguish the uniforms from other "black and white" iterations likely to come.

Rating: B. The concept is good, but it doesn't fit in with the team's theme.

Analysis: It's a total departure from their current uniforms, and a tribute to Memphis' ABA team, the Memphis Tams. The jersey is yellow, with the word "Memphis" written in classic turn of the century style lettering. The shorts are green, with the Tams logo in the corner and white used as an outline.

Opinion: I like that Memphis is going bold here and paying homage to their old ABA predecessors with no regard to their current colour scheme. The uniform is modernized well. The only real critiquing I could do is of the original jerseys themselves, which are completely wacky and look like they belong in the 70s. The font pays homage to the city and traditional "southern" culture of the town, while the heavy use of yellow is enough to burn your eyes out. All in all, well done.

Rating: B+. An original jersey worth bringing back, but it would never work in today's NBA, and I don't like it too much personally.

Below: The Jazz, Kings, Bobcats, 76ers, Raptors, and Nets! 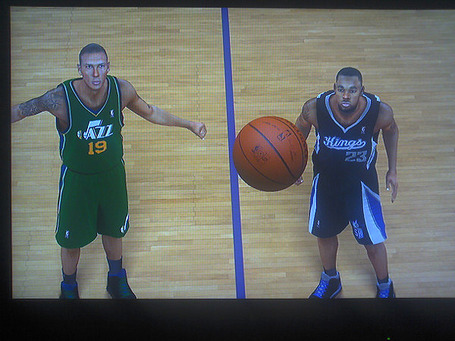 Analysis: This is a secondary uniform that should have come out earlier, but were probably shunted by the NBA's rules concerning alternates. The Jazz use their third colour, green, as the main colour of this uniform, shifting blue to secondary and gold to third. Everything else remains the same.

Opinion: The Jazz uniforms add deep green to the NBA, something that has been lacking since the departure of the SuperSonics. Plus, the original Jazz used to wear green uniforms, so it's a nice homage to team history.

Rating: B+. A good alternate of a good uniform that brings more colour to the NBA. You can't ask much more than that.

Analysis: The Kings have brought back black as the colour of their alternate uniforms, and replaced the traditional "Kings" font on the front with the classic Kings front they used from 1985-1994.

Opinion: Again, it's nice to see black on the Kings, as Kings in black jerseys remind me of the Chris Webber Kings in the late 90s and early 00s that tore up the league. Obviously, these Kings won't be doing that for a while, but the sentiment is a good one. But the use of the classic Kings logo is a bit of a stretch here. The current Kings uniforms are ultra futuristic looking, with a highly simplistic and stylized design. So why clutter that up with a classic logo? Why not just keep it futuristic looking, or go all the way and make the alternates look a bit more classic? I appreciate the attempt, but this design just looks like a clash of cultures.

Rating: C-. Black is good, but the logo is just too much. 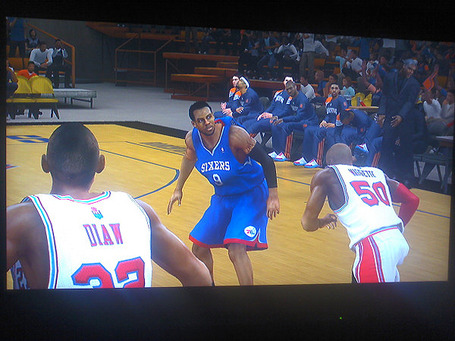 Analysis: They are a complete departure from the current Bobcats uniforms, and, indeed, the uniforms of the entire NBA. They are mainly white, with red and light blue as secondary colours and in classic font. The rest can't be seen.

Opinion: I really don't understand these uniforms at all.

Grade: Incomplete. At least they're not blue.

Analysis: This is just another alternate jersey that is a natural extension of a team's regular jersey. The primary colour is now blue, with the secondary colour as red and the third colour as white. The rest of the jersey is unchanged.

Opinion: The Sixers had some rarely-worn blue alternates back in the Iverson days and they couldn't go back to black, so these uniforms make sense. But they just don't bring anything in terms of originality, and the NBA has enough blue teams.

Rating: C+. Not amazing, but necessary, I guess. 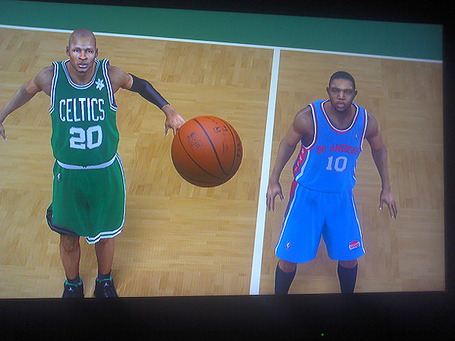 Analysis: The jersey use light blue as a base and are an attempt at a retroish kind of thing. Los Angeles and the number are in classic font and not outlined. The racing stripe in the side is red and decorated with stars.

Opinion: These jerseys are abysmal. I thought the Clippers jerseys couldn't get worse, but they have. With the 76ers and Wizards already basically having the same jersey, the Clippers thought they could get away with making their light blue. Well, they did, but these jerseys are still just a terrible looking copy of a current trend. "Los Angeles" is hard to read, the new logo on the shorts looks like Pepsi, and the stars on the side are just silly. Horribly, horribly done.

Rating: F. Easily one of my least favourite uniforms of the past few years. 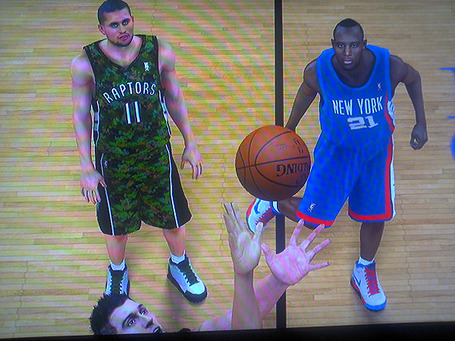 Analysis: They are the Raptors current uniforms with camouflage substituted for red.

Opinion: These uniforms are terrible. Again, you have the problem of a modern uniform associated with an outdated camouflage design that hasn't been used for anything but hunting for a long time. Plus, it just looks like something a trucker would wear. In the metropolitan and stylish city of Toronto, who's going to want to wear this? As Bob Barry, Jr. would say, "You tell me."

Grade: D-. Saved from the bottom because they aren't totally camouflaged and because they're not as bad as the Clippers uniforms.

Analysis: It's a throwback to the old ABA days of the New York Nets. The uniforms are pretty much unchanged, except when considering modernization.

Opinion: Okay, I love these Dr.J Era duds as much as anyone, but this was a horrible time to bring them back. Why in this season, the team's last in New Jersey? Why in an era where the Clippers, Wizards, and 76ers all share the same colour scheme?

So, what do you think? Which alternates are the best? The worst? Vote in the poll and discuss in the comments below!