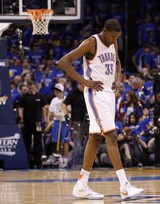 I was hoping against hope that I would never have to write this post, but the NBA and NBPA have not reached a place where an agreement can be reached, so David Stern has officially announced the cancellation of the first two weeks of the 2011-2012 season.

These are the Thunder games that are now cancelled:
What makes these cancellations doubly painful is that, as you can see, six out of these eight games were against playoff teams from last season, including the defending champion Mavericks.