What Are the Odds?

Share All sharing options for: What Are the Odds?

The Daily Thunder guys had a nice little pull in their OKC-Dallas recap today, noting the rather unusual sequence of events that closed out last night's ending.

In one of his liner notes, Young notes that if you took the under for this game, you got screwed.

If you're not already gambling savvy and are baffled as to what I'm writing about, would you care to see how?

First, Daily Thunder did yeoman's work in making the video so you can see what happened. Take a look.

The Thunder are up 99-92, with less than a shot clock's time remaining.  Durant brings the ball up the court to avoid the eight second back-court violation, and then he was content to just hold the ball as the time ran out. He parked right in front of Mavs coach Rick Carlisle, who I'm sure had zero intention of causing trouble.  With about eight seconds remaining, Carlisle stepped onto the court, gave Durant a pat and likely a word of congratulation, and I'm guessing that somehow signaled in Durant's mind that the game was over.  He handed the ball to Carlisle. The referee standing right next to them then proceeded to botch the call; instead of calling a technical on Carlisle for leaving the bench and interfering with game play, they instead called the turnover on Durant for stepping out of bounds, even though Durant was still technically IN-bounds and was handing the ball to a member of the Mavs bench who was not actually ON the bench.

Sidebar: I really can't understand how the refs managed to blow this one.  They could have easily conferred with each other, since they obviously saw what had happened.  But for Carlisle interfering with play, Durant would not have turned the ball over.  The call on the play should have been overturned.  I'm guessing the refs were probably thinking, "Game is over, why bother?" You can even see veteran ref Steve Javie joking with Carlisle about it afterward. Really lazy.

So who cares, right? I guarantee you, quite a few people cared. Let's take a look at Bodog, the online betting site.

In case the story doesn't remain up for long, here is a screen grab: 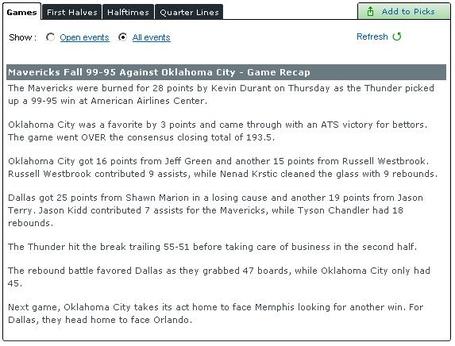 If you read two paragraphs into that story, you will see a little line that says:

The game went OVER the consensus closing total of 193.5

If you're not a betting person, this is what the sentence means: for each NBA game, there is a betting line that sets what the combined final score will be.  In this game, Bodog had set the betting line at 193.5, and the bet allows you to take either the over or the under. What this means is, if you put money on the UNDER, you were betting that the two teams would combine to score LESS than 193.5, and conversely, if you bet the OVER, you were betting that they would score MORE than193.5.

Since the Mavs were missing two of their starters, the likelihood of the game being a lower scoring affair was high.  I even made a crack about it in yesterday's Loud Links.

Instead, with six seconds remaining, the Mavs took the ball out of bounds.  They inbounded the ball and instead of running out the clock, DeShawn Stevenson took the pass and fired a 3-pointer that went in with two seconds remaining.

(incidentally, shouldn't there be some outrageous outrage given that the Mavs were still trying to score, even though the game was all but over? Isn't that poor sportsmanship or something? I thought that's what was being told to us Thunder fans this past week)

The final sequence is trivial in the small sense that it did not effect the outcome.  Never the less, if you can get a call right, why not do it?