Anatomy of a Final Possession Shot

Share All sharing options for: Anatomy of a Final Possession Shot 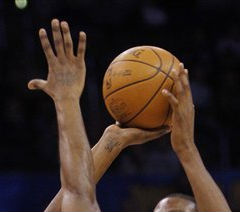 Last evening's game against the Memphis Grizzlies was close coming down the stretch. It probably shouldn't have been, mind you. The Thunder collectively did not play well. Once again they were tormented inside by a dominant post-presence (Zach Randolph), dominated on the boards, and Jeff Green posted one of the most baffling stat lines I've ever seen a power forward submit.

This post however is not about that. Rather, it is about those final few seconds in this game, and many other games like it, where a team finds itself down by one or two possessions. Last night, it was the Grizzlies who were up by three with under a minute to go. The Thunder had been playing chase throughout the quarter, and now, as the final seconds were ticking away, they were forced into a scenario that has but a few options that can change the course of the game. In fact, even executed perfectly the trailing team still might not win; there is always a certain amount of luck involved as well as a reliance and a hope that the other team might make a mistake.

With 25 seconds to go, Grizzlies center Marc Gasol (the less handsome brother of Laker Superstar Pau Gasol-seriously, they're like the taller, skinnier versions of the Ryan Bros) missed both free throws. Durant rebounded and called time out. 23 seconds to go, with possession. An opportunity.

Here are the two general scenarios:

OPTION 1: Look for the quick 3-pointer, and if it isn't there, look for a quick 2-pointer followed by a foul. Make the other team hit its free throws, and then roll through the scenario again.

This scenario is probably the most popular in both college and the pros. The reason why is that it best lends to a team that knows both sides have a higher probability of doing something that favors you, the more chances you create. In other words, the more plays that happen, the more likely the Thunder will get a good look at a 3-pointer, and the more likely the Grizzlies would be to make a mistake (missed free throw, turnover, etc). It syncs up well with the general chaos that happens at the end of games and the sense of urgency everyone feels when they know that precious seconds are ticking away. The scenario also stops the clock frequently and it is easier to make sound decisions when the clock is stopped.

With 23 seconds to go, it looked like this was going to be the path the Thunder chose. Durant came off of a screen to catch the ball at the top of the arc for a 3-pointer, and the Grizzlies closed on him. He quickly found Westbrook, who took off for the rim. Both aspects of the play - Durant's decision and Westbrook's drive, were quick and decisive and gave them plenty of time to continue the process.

When the Thunder didn't get the quick steal, Westbrook gave the foul on Tony Allen, which, all things considered, was not a bad fouling choice. He did make the two clutch free throws though, and following a time out, the Thunder had another shot at the same scenario.

With 15 seconds to go, the Thunder had plenty of time to probe for the 3-pointer, and if it wasn't there, get a quick two like before. Durant took the inbounds pass 31 feet away, with two guys in his face. He looked. He elevated. I screamed at the TV.

According to Darnell Mayberry, Durant shot it because he thought he was going to be fouled before the shot. I understand the feeling, but that isn't the way it looked. He was 31 feet away, and nobody had closed on him quickly enough to prevent a shot with an aggressive foul. Durant fired without hesitation. At that point in time, with over 10 seconds to go, Durant has to realize that with the Grizzlies stretched out on defense, SOMEBODY is open, and probably in open space. Two passes could have yielded a 3-pointer or a layup. Durant shot it though; I saw it, you saw it, we all saw it. Westbrook certainly saw it, because he was visibly annoyed at the shot selection as the deep 3 missed everything. The Thunder had given up their closing angle and the potential for more chances to tie it up. Ball game.

OPTION 2: With almost a full 24 second shot clock, run a tried and true offensive play that frees up a 3-point shooter.

This option is the more difficult of the two in the sense that it requires complete trust between both coach and players and amongst the players themselves. It requires the discipline to know that 15 seconds means 15 seconds, not five, three, or less than one. The coach has to know that his play WILL spring open a shooter, and the players have to know that the coach has been through this scenario enough times that he has the ability to put them in position to get the open shot. It looks marvelous when it works. It is also quite rare, because few teams have that kind of chemistry and discipline.

Chemistry and discipline? You're probably thinking that I'm thinking about the Spurs. You would be right.

Let's go back in time a few years to the 2006 playoffs, where the Spurs were locked in a close battle against the Sacramento Kings. The scenario was similar - the Spurs were down three, with the ball on the side, and had 14 seconds remaining to try and tie the game. Check it out (apologies for the quality).

It is a bit difficult to see who is who, so let me walk you through it.

Coaching, patience, discipline, and chemistry. It takes a long time to get there, but when it does, plays like this one work. Keep the faith.

Finally, I'd be remiss if I didn't pay tribute to one of the great out of bounds plays in NBA history. 14.4 seconds remaining, down two, but much more was on the line. Namely, an NBA championship.