The Curious Case of James Harden

Share All sharing options for: The Curious Case of James Harden

No, I don't think James is aging in reverse.  And I apologize for the hackneyed movie reference.  Although it does allow me the opportunity to link to this.

What prompted the post is this article I came across at NBA.com:
On the Heels of Strong Month, Harden Continues to Dedicate Himself on Defensive End
Now, the piece is a fine story that takes a look at Harden's growth as a defensive player.  That is wonderful - I'm glad that he is improving, and I'm glad that his improvement is catching the eye of writers and prognosticators.
The question I keep asking myself though is, why?
What I mean is, why was this particular story written? I'm not being condescending, since I obviously benefited from reading it.  I am just extremely curious as to why James Harden, the first guy off the bench for the Thunder, receives such attention both on a local as well as a national scale.  What causes me, the fan, to immediately go to his stat line after a game? What causes the sports writer to comment on him on a nightly basis? This vexes me.  I am terribly vexed.
I have some theories; some are red herrings, others might be closer to the truth.  They probably aren't very good, but perhaps we can get closer to the truth if we examine the peculiarity that is the James Harden experience.
1. Harden was a high draft pick.  Let's take a look at the 2009 NBA draft. A few names do stand out: the Dunkmaster Griffin, the buzzer-beating Tyreke Evans, and the offensively fluid Stephen Curry are the most well-known.  Aside from those three, take a look at the rest of that list.  Hasheem Thabeet? Jonny Flynn?  Jordan Hill? It is not my intention to pick on those guys; I hope they all flourish down the road.  What I am saying though is that the 2009 draft, a year and a half out, can be summarized thus: one sure thing (Griffin), two high picks that have done well (Evans, Curry), one surprise (Jennings at 10) and a handful of young point guards that look like they will eventually be starters in the league down the road (Holiday at 17, Lawson at 18, Maynor at 20).  In other words, it was a relatively weak draft and the lottery picks have mostly not lived up to the hype.  The Thunder had around an 80% chance of blowing this pick.  Perhaps he didn't have "Superstar" written all over him, but in relation to most of the rest of the picks, he was as sure a thing as was available.  You have to draft somebody, right?
2. He has gotten an inordinate share of criticism.  A while back, I pulled out some quotes from a Bill Simmons podcast where Bill spoke at length about Harden's failure in living up to expectations.  It was largely critical, but mostly fair.  If a player is going to become great, you see the potential early on. The first two to three years awaken the masses to the new prodigy, the next seven are spent reaching their professional peak, and the rest of the career is spent fighting against Father Time.  Simmons has spent a fair (and I would argue, disproportionate) amount of time dissecting Harden's game, and how he is worried that the Thunder blew the pick. I do believe that, since Simmons is probably the most well-known NBA writer in the history of the world (apply Bill Walton voice when reading that statement aloud), the impression has trickled down from the national to the local level as well, creating an effect that would indicate that Harden has been a disappointment in year two.  If a guy like Simmons says it, most will be willing to believe it, no matter how often Sam Presti and Coach Brooks disagree. 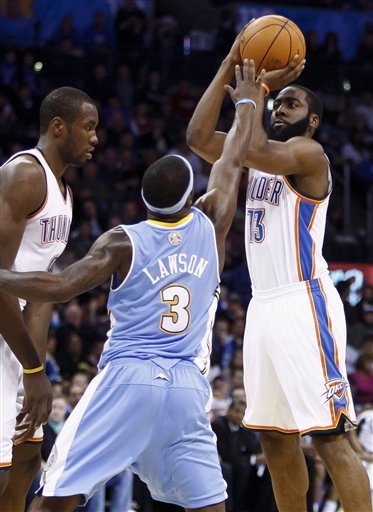 I don't disagree with Simmons' take on Harden, but I am puzzled as to why some of the other guys in this draft have not received the same criticism.

3. There is a little bit of proud parent syndrome going on.  As a result of Simmons' and others over-evaluation of Harden so far this year, his supporters have naturally pushed back.  If you have read Darnell Mayberry at the Oklahoman for any amount of time, you will know that, apart from the natural priority he has given toward Durant and Westbrook, he will most frequently address Harden's game.  Mayberry has been looking closely for a sign, any sign, that Harden is figuring it out.  I think it is in part good reporting, but also in part because of the negative press that Harden has gotten as he struggled through the first quarter of the season.  Now that Harden has seemed to turn the corner (Iconic dunks can do that for a man), the fullness of his game is coming to light.  The phrase, "Jack of all trades, master of none," comes to mind.  It is often seen as a slight, because Harden doesn't do any one thing (at least for now) at an elite level.  He does, however, do a lot of little things really well.  If you need some points, he can get you 18-20.  If you need some better passing, he'll get you 4-5 assists.  Rebounding? No problem.  Key defensive stops? He's getting that done as well, as the article at top proposes.  He consistently makes an impact when the starting five have struggled. As his game has strengthened, it has given everybody from the pro writers down the opportunity to say, "Check out MY man, James.  He looks as cool as Superfly and now his game is matching it as well."

...
If we take these factors in collectively, the question remains, what does it all mean?  I think this is the crux of the Curious Case of James Harden; when you have a team, YOUR team, a team that you like, you follow, and you care about the parts as much as the whole, and that team is on the verge, and you find yourself with a high draft pick..You. Cannot. Miss.  Simmons is afraid that they missed, and he takes it personally every time he sees Stephen Curry unload a jumper so soft that Curry's not making it rain, he's making it snow.
Here is a better question - why does Simmons care so much?  Because he has been the biggest and loudest drum beater about Harden, there must be a reason why it matters to him.  We know that Simmons has had a man-crush on Durant since college.  He argued passionately, and was later vindicated, when Durant became the sure thing and Oden fell apart.  He has said many times that he watches the Thunder play every game.  Bill has a vested interest in both the NBA and in the Thunder.  I think this goes deeper though. 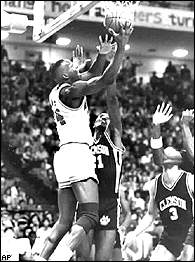 You know what happens when teams on the verge miss big picks?  They fall apart.  The most recent glaring example is how Detroit, still high as a kite after vanquishing the first Laker dynasty of the 2000's, drafted Darko Milicic over Dwyane Wade, Carmelo Anthony, and Chris Bosh.  In a few short years they went from the team that ended the ShaKobe dynasty to just another 45 win club (on a good year), their prospects of successful longevity over before it really began.  Simmons' real team, the Boston Celtics, missed too.  Not quite in the same way, no.  But they missed, and Simmons is still and forever will be scarred by it.  The Celtics missed when they, also fresh on the heels of a 1986 championship, drafted Lenny Bias.  Bias was supposed to be the continuation of the Larry Bird era.  If you're old enough, you know the story.  If you're not, reflect on it with what I consider one of the best things Simmons has ever written.  I'm sure it is still raw for Bill, almost 25 years after the fact.  I'm no psychologist, but I'd be willing to bet that when Simmons thinks about teams that miss, he thinks about how his team missed, and the ripple effect it can have on all the good things we think of when we think of the NBA.

In close, I think you can see that this piece, while about Harden, is not really about Harden.  It is about what we hope for, what makes us proud, and how the smallest of things can shape our paradigm forever.
And that James Harden guy? He's all right.
__________
Greetings fair readers.  This marks my inaugural post here at Loud City. I previously had been blogging the Thunder's season at OKCThunderDome, and was invited to join the team here so we could combine forces, like a much weaker  version of the Avengers (I'd probably be Ant-Man).   Thank-you to those readers who found my small blogging corner of the Internet, and I hope you will continue to join me here at Loud City.