Three Lingering Thoughts Regarding the Thunder and the New Orleans Hornets

Share All sharing options for: Three Lingering Thoughts Regarding the Thunder and the New Orleans Hornets

Last night's game against the Hornets was a tense affair, which was surprising because in the first half, you could have sworn both teams had the opportunity to run away with it and make the final score a laugher. Here are three random possibly interesting thoughts that will stay with me until the Thunder face the Timberwolves tomorrow.

1. A playoff team needs players to execute the basic sets. With 14.4 seconds remaining, The Thunder had a tie and the ball in their hands. Just like in their last game against the Knicks, the goal was to bleed the clock so that they had either the win or the tie to send it to overtime. Russell Westbrook is the best candidate for a drive to the rim, Kevin Durant is the best for catching and shooting, Jeff Green is the best for waiting for a drive and kick, and Serge Ibaka is best for catching lobs. All of these players could have been part of the final sequence; but more pressing was the fact that the Thunder HAD to be able to get the ball in the hands of one of them to engage any of these players' strengths. They had already failed one inbounds attempt and were forced to call a time-out. The second time, instead of setting up an aggressive inbounds play to free up somebody in open space, they went with a garden-variety set where Nick Collison tried to screen for Westbrook and then flashed to the ball. Collison held the ball waiting for Westbrook to curl back to him. Unfortunately, what this set failed to do was give Westbrook any opportunity for separation; Collison didn't give him a good screen to begin with, and then Westbrook didn't curl back tight enough to seal off Chris Paul. Paul beat Westbrook to the spot, poked the ball away, and got the key steal that led to the loss. Take a look:

The Thunder could have either ran an overaggressive set (like stacking tight ends in football) or they could have paid closer attention to detail. Instead, the sloppy screens opened up the opportunity for Paul to make a great game changing play.

The Thunder's final inbound set isn't worth too much nit-picking, but if you fast forward that video to 2:37, you can take a look. There are 0.5 seconds remaining, so by league rules, there is time for a catch-and-shoot (0.3 is the absolute threshold; anything at 0.3 or less, it must be a tip-in). Even though it could have been a catch-and-shoot, there clearly wasn't enough time for a good look; it would be a heave. At the very least, it would behoove the team for the shot to at least be in close to the basket, even if it isn't a lob-tip shot, because then at least you have the advantage of a higher percentage shot and a softer bounce. Never the less, if you look at the play, everybody is out on the perimeter; nobody is running at the rim. 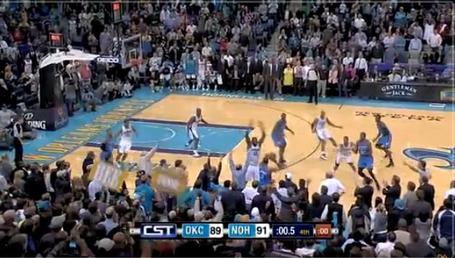 Westbrook (corner) started close to the rim, but then ran away. The best guy for a tip-in, Ibaka (center) is facing away from the rim, 22 feet away. Even if the pass hadn't been high, it was doubtful that Ibaka could have caught, turned, and shot in 0.5 seconds. I know that it's probably not fair to kill them too much for this set, and I won't. My bigger point is that their approach to the situation did not even give them a reasonable chance at finishing the play.

(As an aside, this scenario reminds me of the 2009 playoffs when the Lakers beat the Nuggets. The Nuggets inability to run an inbounds play cost them two games, as Trevor Ariza stole the ball of the inbounds pass both times. Inbounds plays may not seem like a big deal over the course of the regular season when teams do it hundreds of times. When the pressure is high though, the players need to trust their teammates and the offensive sets, and in the Thunder's case last night, they failed in both.)

2. The Thunder stopped going to their most effective asset. Once again, Durant got out to a hot start but then faltered in the stretch. I have no qualms about him taking a last-second shot, regardless of his shooting percentages; he's still tall, can jump, and his shot is truer than most. My gripe is that the team continued to go to Durant down the stretch and he continued to miss shots. He re-entered the game with seven minutes to go, and finished out the quarter shooting 0-5, with one turnover (offensive foul). None of his shots were close to the basket, and he didn't attempt a free throw. He simply wasn't getting it; his shot wasn't falling, and he wasn't generating points through free throws or assists. I know the Thunder want him to be The Guy, but at the same time they were missing their most obvious favorable match-up: Jeff Green.

Green finished the game scoring 19 off of 8-13 shooting, and he was instrumental in keeping the Thunder in the game after their disastrous 2nd quarter. He was the only guy on the court was was consistently beating his man on the low block, backing in and getting jump hooks and short jumpers. The Thunder's offense was a bit disorganized due to the Hornets' defense. Green was the only guy who was continuously showing deliberate patience in what he was doing, and it was paying off. Yet in the final three minutes, when good possessions were paramount, Green did not attempt a single shot.

I'm sure that trying to manage a game is chaotic, and it isn't fair of me to second-guess Coach Brooks' game plan. What I will say is that the Thunder seemed deliberately intent on putting the ball in Durant's hands at the end of the game and abandoning what had been working earlier, and it really backfired.

3. Chris Paul plays the point position like a pit bull. It is maddening to watch him go against the team you cheer for, because Paul is out on the court trying to exploit any advantage or edge that presents itself. He punches, he pushes, he flops, he complains, he talks trash, and he does it all some more. He also doesn't care what you think. He'll keep doing all those things because he is convinced it gives his team an edge to win games. And yet, I can't help but like him, because I wish Westbrook (and actually all point guards in the league) played more that way. In fact, Westbrook does play that way whenever he goes up against Paul, because Paul brings it out of people. You could say that Paul raises the collective level of BOTH teams.

Paul's play, and Paul's team, reminds me so much of the Detroit Pistons back in the late 1980's. I'm not asserting that they play dirty like those Pistons teams did, but they have the same kind of attitude. It is the attitude of knowing that they cannot match up with most teams on a talent level (the Pistons' leading scorer only averaged 18.2 per game during their 1st championship run), so instead they sought to exploit any other edge that they could. Nothing was too small to use to their advantage.

Of course Paul has often been compared to the Pistons' leader of that team, Isiah Thomas. However, it is not just in terms of their comparable talent, but in their fierce attitude in leading their teams. Thomas hid his nasty streak behind an angelic smile; Paul has no misgivings about scowling most of the game. In both cases, the point guards' take no prisoners attitude infused their entire team with an aggressive mean streak that allowed the teams to compete at a high level on any given night.

Here is a memorable quote from Isiah Thomas during a defunct Dan Patrick hosted ESPN show:

That quote could easily have come out of Chris Paul's mouth.

I'll leave you with this quote from Coach Brooks:

"I've always admired [Paul's] ability to just put his stamp on every game. Every game you see it. He's leaving everything he has, and he's forcing it on his teammates, too." - Scott Brooks