Share All sharing options for: 10 Things a Young Blogger Has Learned About the Thunder and the NBA at This Season's Mid-Point

Here we are, having witnessed 41 out of a season's 82 regular season games. I have now officially been a blogger for those 41 games, and so it is time to take stock. What did we think we knew? What do we know now? What can we expect?

WHAT DID WE THINK WE KNEW?

1. We thought we knew that the Thunder were on the cusp of making The Leap.

Expectations were high in the early going. When the Thunder tripped over themselves out of the gate, we collectively inhaled. They went on a string of wins, and we thought, "Here we go." They lost to the Mavs again (without Dirk), and we sighed, thinking the Thunder bought into the hype. And on and on and on the carousel goes.

Here is the essential problem with this way of thinking that nobody really brought up: with the exception of the Pistons in 2004, nobody makes The Leap, at least in the way everyone was thinking. It doesn't happen. Good teams stay good for a prolonged period of time, and their post-season success becomes a matter of routine. The "second season" is a bear, and no team plays it well until they've done it a few times. To think that the Thunder could go from 50 to 60 wins in a single season and surpass the Lakers to challenge for the Larry O'Brien trophy... that wasn't just wishful thinking, that was believing on an order of magnitude that something that had never happened before would happen now. The best point in history to consider is back in 1995 when the Magic, featuring Shaquille O'neal, Penny Hardaway, Nick Anderson, and Dennis Scott, beat the Jordan-led Bulls in the playoffs and met the Houston Rockets for the championship. The Magic team was by far superior in talent, and had the best young players in the league in Shaq and Penny. They were swept in four games to a team that won 47 games in the regular season.

2. We thought we knew that the Spurs were old, the Heat were doomed, and Kevin Garnett had gone beyond three shades of crazy.

The Spurs are the model franchise at how to create long term success using parts that change from year to year. Tim Duncan is possibly the only player short of Michael Jordan to possess the proper mentality and resolve to carry a team across a decade in such a way. Keep in mind that from 2004 to 2006, the Lakers won 34, 45, and 42 games, respectively. If the Lakers hadn't pulled off the steal of the decade in bringing Pau Gasol to LA, that trend might have continued.

The Heat may still be doomed; in a seven game series I don't think they can beat either the Celtics or the Bulls, if we assume everyone is reasonably healthy. The Heat earned their early season run feasting on teams like the Cavaliers, Wizards, and Bobcats. Their one big win, against the Lakers, was in large part due to the fact that LeBron James and Dwyane Wade do one thing better than just about anyone else: drive the ball into the lane. The playoffs are about match-ups, and when it comes to dealing with the interior presence of guys like Boozer, Noah, and Garnett, the Heat will have no answers.

Garnett is in fact three shades beyond crazy.

3. We thought we knew that the James Harden draft pick was a mistake.

The early season returns weren't promising. Harden was struggling to find his mojo, while two players taken after him were flourishing. There was much chatter, an unusually large amount of chatter, that the Thunder had blown not just the pick, but their chance at becoming truly great. Instead of drafting an instant starter, the Thunder have woven Harden into the mix by making him the first man off the bench. I know that the current NBA landscape is vastly different from decades prior, but it is important to note that, not that long ago, this is the way things were done in the NBA. Did you know that during the Celtics' hayday in the 80's, they rarely played their rookies? It was practically a rule - if you were a rookie, you sat and watched the veterans play.

WHAT DO WE KNOW NOW?

4. There is no substitute for age and experience.

It is a stunning and yet kind of pleasant revelation. We all know that the Thunder are the youngest team in the league, and that their coach and GM look like they just fell out of prep school. We've seen young teams before; seldom does their promise come to fruition. In fact, the last time I can remember watching a young team truly morph into a contender organically is by looking into the annals of the Thunder's history, when the Glove, Big Smooth, and the Reign Man ruled the northwest (you do know who they are, right?) It is very difficult to keep a team together long enough to see them season and mature. The biggest challenge for the Thunder long term will be to keep a team together long enough to gain enough experience to be able to use it when it matters. We have hope though; we have seen the Thunder adapting on the fly, and Coach Scott Brooks learn from his coaching errors. Many more errors will be made both in the front office and on the court; it appears though that the organization has the discipline and humility to correct them and improve. There needs to be a collective attitude from the top down that believes, "Though we may lose this time, we will stick it out until we win in the end."

5. The Thunder have a great bench; it could be better.

It does me no good to continue to harp on this topic, so this will be my final word (at least for today). When it is time for the second unit to come in, the Thunder surge. The play of Serge Ibaka, James Harden, Eric Maynor, and Nick Collison raises the collective defensive prowess of the team almost immediately.

That said, I remain steadfast in my belief that with a few small tweaks, both the first AND second teams could be improved. One thing I've noted over these games is that Kevin Durant and Jeff Green operate better when only one of them is on the court at a time. This makes sense because they're essentially the same player with slight talent disparity. Green is not a high minutes guy; his play doesn't increase proportionately the more he plays. It makes much more sense to have Green come in off the bench and play along side Harden and Maynor. He can play the primary scoring position and not have to worry about making sure Durant gets his touches. If Ibaka were to join the starting line-up in Green's place, both first and second teams would improve; the first team with its defense, and the second team with its offense.

6. The Thunder have the talent to beat the Lakers. The question remains whether they have the resolve.

I reflected on their first match-up this year the other day. Collectively, I don't see a lot of talent disparity between the two teams. What I do see is a difference in skill and experience. Teams and players gain skill by working hard together. Only by working hard can a team place itself in a position to gain more experience. Right now, the Thunder are four possessions away from beating the Lakers. Those four possessions can come at any point during the game, but somewhere along the way, the Thunder failed and the Lakers succeeded in those four moments. Skill means learning how to maximize talent and awareness to the point where the team finds those four opportunities mentally, emotionally, and physically. Experience means knowing how to flip those moments from a negative to a positive. It is not easy, but every champion learns to do it.

7. The Lakers are the hurdle; the Spurs are still untouchable.

I do believe that if the Thunder meet the Lakers in the playoffs this year, and if the Thunder have home court advantage, that they can win. It would be difficult and would likely go to seven games. I think though that with the collective knowledge the Thunder will have about both themselves and the Lakers, the series win is not a pipe dream, but an attainable reality. It would be sweet. It would be doubly sweet watching the Lakers cry again.

I do not think that the Thunder can take more than two games off the Spurs in a playoff series this year. That mountain is for the future.

WHAT CAN WE EXPECT?

8. All roads to success run through Durant. 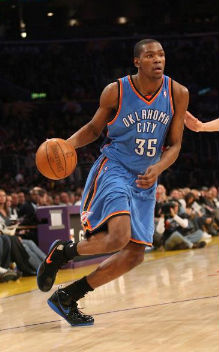 Russell Westbrook is critical to the Thunder's success, there is no doubt about this. The answer though to any question about what is the true key to the Thunder's chances is a) Durant, b) Durant, and c) Durant. There are other point guards like Westbrook - Derrick Rose, Chris Paul, and Rajon Rondo can play as well if not better. However, there is nobody else like Durant. He is a transcendent scoring force. He can carry a team through a series the way nobody else on his team can. He is The One.

9. The race for the third seed will come down to the end of the season.

The Thunder are currently 27-14, first in the Northwestern division. They are on pace to win 54 games this year, an 8% increase over last year's surprising finish. Good news, Thunder fans. If they can maintain that same rate for another six years, in 2017 they'll be on pace to win 86 games. Let's see the Lakers pull that one off.

Seriously though, the race will be tight. The Thunder will be battling the Jazz for the Northwest, which will be extra challenging made by the fact that they have two more head-to-head match-ups, and the Jazz possess a front line that is taylor-made for chewing the Thunder up on the inside. OKC cannot have any lapses where they lose three to four games in a row. The Spurs' success is a given. I also expect that Dallas will rebound once Dirk Nowitzki gets re-acclimated to his teammates. That team is veteran led, well put together, and knows how to win close games. Lastly, I expect that the Lakers will dawdle as only a team from LA can. It really won't matter to them though; their success is not predicated on home court advantage, but rather, playing the music that Phil Jackson wants them to play. The third seed is there to be taken.

I have always enjoyed it, even as I have become an emotionally detached spectator. Now though, having a team in which I have a vested interest, it has heightened my levels of observation. The team is a living organism, and everything matters. When I can see how much everything matters to the Thunder, it matters more to me, too.