Five Thoughts Regarding the Thunder and their Purple and Gold Nemesis, the Los Angeles Lakers

Share All sharing options for: Five Thoughts Regarding the Thunder and their Purple and Gold Nemesis, the Los Angeles Lakers

I watched the game last night with great interest, because in a large sense, losses to the Lakers are what currently define the Thunder. It is a defining feature of heroic books and film that the villain is both as necessary and as important to the hero's progression as the hero himself. I don't think of the Lakers as a villain per se; (Actually, I kind of do...for 25 years' strong, I most definitely do) but they, more than Utah or the Mavericks, represent the mountain to be climbed. The Jazz and the Mavs are merely in the race to the top of Mount Kobe.

Five thoughts came to mind while watching the Thunder lose to the Lakers last night.

1. The Lakers have entered the 1998 Bulls portion of Kobe's career.

By the end of the great Jordan-led Bulls freight train, they were winning games purely on the force of will and muscle memory. They even admitted after the fact that the better teams (specifically Indiana and Utah) probably didn't win during those playoffs. Jordan could no longer carry his team on both ends of the court, injuries nagged everyone, and they could all see the sun setting. Unlike these Bulls, Kobe Bryant still has many good years yet, but the season of him dominating an entire game are all but done. The way they have accommodated this individual regression is by becoming super-efficient in the half-court set, running the offense through Lamar Odom and Pau Gasol. In doing so, the Lakers possess something the Bulls never did - a transition. The notable feature about the Lakers now is they don't have anywhere near as many wasted possessions as they had in the past when the team relied more on Kobe's kinetic energy than Gasol's post-passing.

Herein lies the opportunity for the Thunder. If the Lakers' goal is to reduce possessions to maximize their efficiencies, it is to the Thunder's benefit to increase the number of possessions by speeding up the game. We could see this facet playing itself out during the game. Any time the Thunder pushed the ball and took advantage of fast break numbers, with rare (albeit Fish-y) exception they were able to convert on the offensive end. The Lakers are extremely sound in a half-court defensive set, where their perimeter guys funnel the ball into their interior wall of giants. They are less so when the opposition attacks with speed and numbers.

2. The Thunder did two things really badly last night. You can probably guess what the first one was.

a. Three-point shooting. Hey, it happens. Your long range shooters just can't find the bottom of the net. However, what should not happen, what cannot happen, is for a team having identified its weakness to continue to try to use it as an asset. It isn't an asset; it has become a liability. I know there have been statistical comparative studies done to see when it becomes disadvantageous to take more 3-pointers than 2-pointers (sadly, the study eludes me) but if I recall correctly, it is right around the point where 3-point shooting percentage drops below about 30%. Once that threshold is pierced, the pursuit of the extra point is detrimental. The Thunder finished 2-22, or just a hair over 9%. A team needs to be self-correcting - when one thing is not working, the team needs to have the discipline to abandon it and find another better option. Statistically this shift should have happened right around the time the team missed its eighth 3-pointer; realistically the option probably should have been weeded out when they missed their 15th. What really kills me though is that for the three main culprits (Kevin Durant, Jeff Green, and James Harden), who shot a combined 2-19, their 3-point shot is without question the weakest part of their offensive games. It baffles me as to why they would want to continue to use it as a primary option, especially after it is proven to be ineffective (at least for a game).

b. Defense against the dribble-drive. We've taken a look at this soft spot in their defense before; in my opinion it is the true problem with the Thunder's defense. If you watched the game, you could see that the Thunder big men (Green, Ibaka, Collison, Krstic) didn't fare too badly. Granted the Thunder group wasn't the Spurs front line, but the Lakers didn't bull-doze them the way we saw Zach Randolph do to them a few games ago. No, the problem was once again in their inability to stop the dribble-drive, especially from the wing into the lane. The middle of their defense was the softest during the 2nd and 3rd quarters, when the Lakers really found a good rhythm in their offense. Repeatedly Kobe, Derek Fisher, Shannon Brown, and even Ron Artest were able to drive into the middle of the lane to either finish strong or kick the ball to open shooters. I hate to kick a man when he's down, but frequently Thabo Sefolosha was the weakest link. As we saw before, he repeatedly positioned himself to seal off the lane, only to let his man go right by him into the paint. Instead of moving his feet to stretch out the Laker drives, Sefolosha continued to use his hands instead of his feet, rotated his hips too early, and ended up chasing the ball instead of impeding it.

The Thunder's fortunes changed when Sefolosha was pulled; there was a reason why he only played 18 minutes, and he probably should have played less. James Harden did a much better job staying in front of Kobe. Kobe still hit his outside shots, because that is what Kobe does. However the Thunder can live with those shots if it means the offense remains on the perimeter and out of the hands of Gasol and Odom in the post.

3. All that said, the Lakers struggle with the same defensive issues.

The Lakers' weak defensive spot, starting almost from the day Phil Jackson, Kobe, and Shaquille O'Neal arrived, has been quick guards who can penetrate and run high pick and rolls. This weakness still persists, and when the Thunder attacked it, good things happened. The Lakers' defense centers around Kobe, Odom, and Ron Artest. The strength of their defense is in their length and strength. Kobe possesses a certain prehensile ability, so he can guard the perimeter and the post, but his days of staying in front of a Russell Westbrook are done. The same thing exists with Artest; he is at his best if he's bodying up against another player, but in open space he can be had. Odom is really the only guy who has the range and dexterity to do both. Despite lack of quickness, the system works because if the nets these long-armed guys cast gets sliced up, they still have Bynum and Gasol sitting back to protect the rim.

From the middle of the 3rd quarter on, the Thunder recognized this weakness and began to exploit it. Westbrook, Maynor, and Harden began spacing out higher in the half-court set and then slicing to the rim when openings presented themselves. This formula has worked against Lakers for 10 years now, and there was scant evidence of it changing last night.

4. Ron Artest is built to stop a guy like Durant. 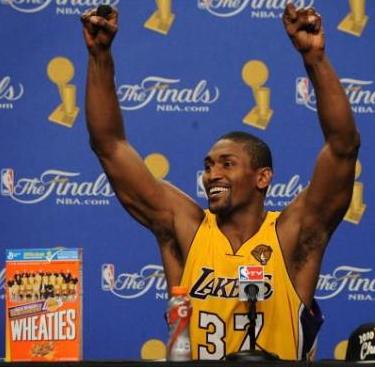 There isn't any getting around the reality at this point. I applaud Durant's desire to stay positive and have faith that his offense will get better. Never the less, the truth of the matter is that in the playoffs Durant shot 35% from the field and 29% from 3-point range, and last night he struggled mightily in producing consistent offense when Artest was in the game. Artest is a master at getting up under offensive players, pushing them where they don't want to go, holding them to prevent clean screens, and forcing them to play at a pace that is sub-optimal. This is what I see with Durant: Artest has forced Durant to play offense at a pace which Durant doesn't want to. The open looks don't come when Durant is ready for them, and as a result Durant rushes into the shot when the slightest opening materializes. It reminds me a bit of baseball batters when they're playing against knuckleball pitchers. When a knuckleball pitcher has his pitch working, it effects the batter psychologically in such a way that they know that they can't drive the knuckleball, so they end up feeling like they have to swing away any time they DON'T see the knuckleball floating toward them. The net result is not that juicy pitches or open looks never materialize; they always do. Rather, the outcome is that when they do come, the offensive player is suddenly thinking, "Now! Now! Now!" and his offensive purpose is cast aside for what he thinks is finally a good shot. This was no more apparent than when a clearly frustrated Durant tried his rip-move, didn't get the foul called, and missed badly.

There aren't many players like Ron "Nature's Steroids!" Artest in the league, but there is one standing in the way of the Thunder's ascendancy. Durant is going to have to learn to deal with Ron-Ron. For the time being, that may mean putting his own offense aside, picking his spots, and allowing the offense to run through Westbrook and Green.

5. Despite any and all short-comings, opportunities still present themselves when you persevere.

Granted, Green's missed 3-pointer that bounced all over the rim, followed by Westbrook's missed free throws, were tough to stomach. To me though, I groaned the loudest during the sequence that happened a few minutes earlier. The Thunder started the 4th down by six, and it remained six with under six minutes to go. The Thunder had the ball and some offensive momentum. Green missed a three (shocker) but Harden grabbed the offensive rebound. He drove the ball into the middle of the lane, just like every other successful Thunder possession. When he was within five feet of the rim, Harden could have easily pulled up for the short jumper or attacked the rim. Instead, he dropped the ball off to Ibaka, which truth be told wasn't a bad decision. The Lakers are big, but they are also slow. Serge Ibaka flushing the ball on someone's head would have ratcheted up the intensity for a competitive finish.

Alas, it was not to be. Ibaka fumbled the ball, Odom stole it, the Lakers scored the next two buckets, and suddenly it was a double-digit lead with under four minutes to go. Granted, the Thunder did get the lead down to four a few minutes later, but to me this play wasn't just a missed shot like the latter attempts, but a missed opportunity to change the complexion of the game. The Thunder's momentum was about to be drained, as they could not shake their poor shooting.