It Has to Hurt

Share All sharing options for: It Has to Hurt 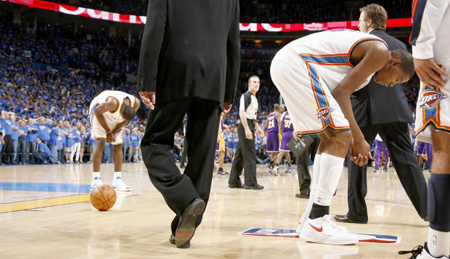 Today at the Oklahoman, John Rohde brings us the Thunder photo of perhaps all of 2010.

A Picture Says a Thousand Words for the Thunder | NewsOK

Oklahoman photographer Bryan Terry took this photo right after the Thunder lost game six to the Lakers in last year's playoff series, ending the Thunder's season. GM Sam Presti requested a copy of it a month ago to show it to his team.

The photo has it all - the Lakers celebrating in the background, the coaches walking onto the court in resignation, the sea of blue in a state of shock...but most importantly, you can see and feel the pain that drips out of the pores of Kevin Durant and Jeff Green.  I had never seen this photo before, but I can tell you that witnessing this scene seven months ago is a big reason why I started blogging about the Thunder. The scene represents one of the great Robert Frost moments in sports - when the road divides, which path do you choose to take?

The story is strong, but what really resonates from John Rohde's story is the sidebar of quotes offered up as a number of players looked at the picture and then offered their reflections. They are powerful, so read them all. Here are a few of my favorites:

"It has to hurt. If it doesn't hurt then we have the wrong guys." - Coach Brooks

"We played great. We just didn't get that last rebound." - Jeff Green

"You don't get many games like that in your career...it stings." - Nick Collison