In Defense of Point Guards; How Does Russell Westbrook Stack Up?

Share All sharing options for: In Defense of Point Guards; How Does Russell Westbrook Stack Up?

In yesterday's post on the problems I've seen with the Thunder's perimeter defense, I singled out Russell Westbrook a bit, not so much to gripe, but as a jumping off point for more in depth analysis. We were able to see through some visual support that there are reasons why the Thunder struggle with opposing teams' guards, and how this struggle manifests itself statistically.

When examining statistics, context is of course everything. You can make a number say practically anything you want it to if you don't also provide a point of reference. Since I didn't do that yesterday, I thought it prudent to provide some follow-up on how the rest of the league's point guards look when examining their defensive contribution.

Here is how the rest of the point guards in the NBA stack up: 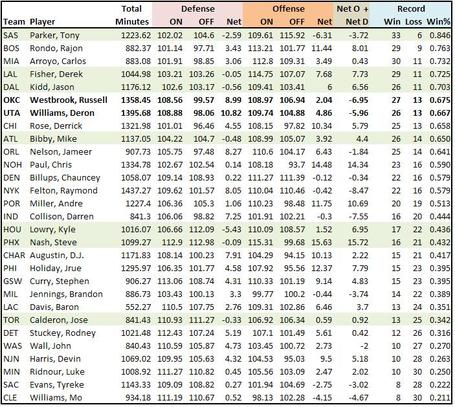 Total minutes and net rating provided by BasketballValue.com.
Records provided by Yahoo! Sports.
note: Memphis statistics were not available at the time of post.

Wooh boy, that's a lot of numbers. It is also pretty random. And when I say random, I really mean that - I ran a correlation between winning percentage and net defensive rating and the correlation coefficient was 0.04. In other words, a point guard's defense statistically has practically no relation to how well a team performs. Interesting, yes, especially since Mr. Westbrook's net defensive rating is so poor.

Conclusions
/throws arms up in the air
This much we know - it still isn't good that Westbrook has a negative defensive rating, but it also is not the end of the world. Also, the guy who matters most to thwart Westbrook's team success (D. Williams) is even worse than Westbrook. I will contend though that to move into that upper echelon of PG play, the air where Nash, Paul, and Rondo reside, offensive and defensive work needs to improve. I think Westbrook will.