On Monday we took a look at the struggles that the Thunder have had with their interior defense. Based on some rudimentary analysis, it is reasonable to conclude that on some basic level, the Thunder have struggled because their best post defender Serge Ibaka only plays 26 minutes a game, and the oft-maligned Jeff Green has been playing out of position. While this interior situation will never be ideal with the given roster, there are ways to minimize the weaknesses. However, a problem that I think has equally plagued the Thunder and not received the same attention is the Thunder's perimeter defense.

It was not that long ago that the Thunder were dead last in defending the 3-point shot. Even now, while not last, they are not great, ranked only 24th out of 30 teams at 37.2%. They are also ranked 24th in total defensive shooting percentage at 46.7%. This isn't just a Jeff Green problem, this is a team defense problem. So let us turn our attention away from Green and over to the guys who are the watchdogs for the team's perimeter, Russell Westbrook, Thabo Sefolosha, Kevin Durant, Eric Maynor, and James Harden.

I have been thinking about this supposition for a few weeks now, ever since I spotted something at the Sports Illustrated Power Rankings Site. The writer Britt Robson noted that Russell Westbrook, early season MVP candidate, floor leader, and the future of the point guard position, is actually pretty poor at defense.

What the deuce, you say? We've watched Westbrook play defense all year. He's lightning quick, averages almost 2 steals per game, is strong enough to body into bigger players, and then loves running the break after the turnover.

All true, of course. So why is it surprising that those defensive field goal percentages are so high? Allow me to refer to one of my favorite authors, Malcolm Gladwell, who popularized the phrase, "Thin Slicing."

There's a wonderful phrase in psychology -- "the power of thin slicing" --which says that as human beings we are capable of making sense of situations based on the thinnest slice of experience." - Malcolm Gladwell

The crux of it is, (you can get the full picture by reading Gladwell's book, "Blink"), we have the ability to make rapid cognition decisions based on very small pieces of information. A lot of the time the decisions are sound; however, sometimes factors can cause our cognition to go awry and our personal bias skews reality. What could possibly cause our keenly trained basketball eyes to go awry when it comes to the Thunder? I'll give you two reasons:

These things are objectively true. Royce Young at Daily Thunder even pointed out that they're in exquisite condition. We package all of these things together and we conclude, "This team should be a good defensive team." These observations have skewed our eyes so that we cannot see clearly what has been going on this year. As I mentioned above, it took a throw-away comment in a power rankings table for me to see it more clearly, and it was only because it intuitively seemed so far off the map. Let's take a closer look at the roster's unadjusted defensive rating: 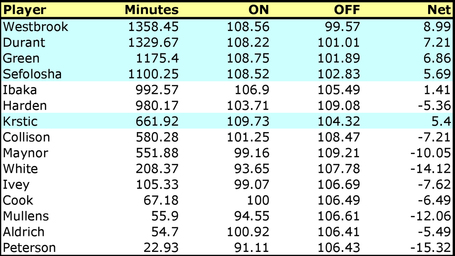 All statistics provided by basketballvalue.com
I've highlighted the team's starting five rotation. The "ON" column represents the amount of points allowed when that player is on the court. Conversely, the "OFF" column represents the points allowed when they are not. The "Net" column is the difference between the two. In this case, a positive net value is actually a negative; it means that when that particular player is on the court, the team gives up more points than if he were on the bench.
All five starting Thunder players have a net positive value, along with the usual 1st man off the bench, Serge Ibaka. My original assertion regarding Westbrook, which may have surprised you, now gains a little more color, at least statistically. It also helps explain why the team frequently finds itself down at the end of the 1st quarter; the collection of the five is shockingly poor at defense. The trend only begins to reverse itself as the bench players Ibaka, Maynor, and Harden get into the mix. Now, when we see the Thunder start to turn things around in the 2nd quarters, it begins to make a bit more sense - their collective defensive talent is increasing.
This post is specifically about the perimeter guys though. Ever since I saw the source of my table, I began to watch the game a little bit differently. I attempted to divorce myself from my rapid cognition bias. Here is what I began to see:
I was hoping that last night's game against the Rockets might alter this perception somewhat, so I studied the Rockets guard-play to see how the Thunder would hold up. Sadly, it was more of the same. Despite missing their leading scorer Kevin Martin, the Rockets back court shot a collective 22-42 for 54 points and for the most part penetrated the Thunder perimeter defense with ease. In the final minute of play, the Rockets guards looked like they were running through a layup drill.
To find a little bit of visual evidence, I turned to our favorite time-suck, Youtube. At the channel NBAPlaybook, we can find many examples of both good and bad behavior. Let's take a look at a few.

In this sequence, Westbrook is on the ball on the left wing. He has his defender up against the sideline, which means in actuality, he's got the sideline to help double-team his man. However, Westbrook applies no defensive pressure, and with the slightest of head-fakes his man has gone baseline and Westbrook can only pursue, giving up the wide-open layup. Compounding the mistake, there is no talk on defense of the breakdown, and the dribbler passes two other Thunder defenders on his way to the rim.

In this sequence, Sefolosha is on the ball on the left wing. Despite taking the inside position on the ball handler and no screener coming up to set a pick, Sefolosha easily gives up the lane. Durant, on the right wing, instinctively moves in to stop the ball in the lane, but then oddly drops off to swing back to the shooter he had left at the 3-point line. The result is that the middle of the lane stays wide open for the little finger-roll.

Here is Sefolosha again, this time on the right wing. Once again, he actually takes the inside position, giving up the baseline, yet gets beaten into the lane once again. No help defense comes, even though there are four Thunder defenders within one step of the ball handler. The result is a wide-open shot in the lane.

In this final sequence of poor defensive play, both Durant and Green are lazy in their defensive pressure. Durant has to run through two screens to stay with the ball handler at the top of the key. Once again, there seems to be a failure in communication as neither Westbrook nor Krstic "show" themselves off the screener, and allow the play to run unimpeded. The defense finally completes the failure when Green does not commit to either the final assister nor his own man, and then gives the weakest of closes on the final shot. It was as if the team collectively gave up, saying, "Let's hope he misses."

Now, I know you're going to kill me on this one, but here is a sequence involving the Miami Heat that show the opposite of just about everything the Thunder demonstrated in the first four clips.

First, notice how the Heat trap the ball handler, Steve Nash. Nash's offensive prowess needs no flattery from me; it stands on its own. The Heat know that they have to guard him tight with their defense to cut off drives, passing angles, and the open shot. The screen comes high off the right wing, and two Heat players come hard on the defensive "show" to both stop Nash from driving as well as take away his passing lane back to his screener. After the screen fails, the Heat do not sag off, but stay hard on the perimeter defense. The defender on the left wing drops off his man to keep the pressure up, letting his man drift to the corner. Letting a man go can be risky, but the Heat player knows that with Nash high on the right wing, he can only get the ball over there with a long swing pass or two separate passes, which would afford his teammates the time to close out. Nash is quick to see the opportunity, and eventually creates both space and an angle to get the ball to his now-open man in the left corner. The Heat are not content to give up though, as we saw the Thunder do. The Heat defender closes hard on the shooter, getting a hand up in his face but without fouling. The result is a deep contested shot that misses, and the Heat are rewarded with a defensive stop.

I know I'm cherry-picking with these clips, but I do think that they are a reasonable representation of what is really plaguing the Thunder defense. The soft interior defense being played is a function of physical short-coming; these sequences above are not. They are more symptomatic of poor coaching and poor defensive discipline. The Thunder don't seem to be talking enough, closing out hard, play defense with their feet instead of their hands, or staying on the floor when the shooter gives the hard pump fake. Fortunately, these things don't require trades; they are correctable.

The question goes forth: can the Thunder deal with their own thin-slicing bias?