David Stern and Jason Whitlock Discuss the NBA: LeBron, Contraction, and How to Remove Tattoos

Share All sharing options for: David Stern and Jason Whitlock Discuss the NBA: LeBron, Contraction, and How to Remove Tattoos 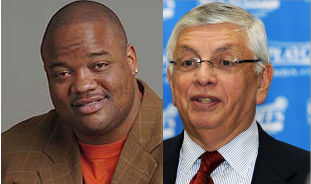 FoxSports and long-time Kansas City sports writer provocateur Jason Whitlock was able to get NBA Commissioner David Stern on the phone for an interview, and they touched on a wide range of topics that I thought would be worth measuring more closely.

Surprisingly, Whitlock does not make a single reference to "The Wire."

Commish: 'The Decision' Right for the NBA | FoxSports

Here are a few of Whitlock's assertions, followed by Stern's answers, and I then offer my intense double-rainbow commentary.

Whitlock assertion: "The Decision" had a positive impact on the NBA.

Stern: I think when you have so many people tune into an event - some of whom have never watched a game before - it does raise the interest of a certain number of people to tune into the games.

Dogburt: The fact is, "The Decision" drew a 7.3 rating, which was the highest overnight rating for an ESPN non NFL program in 2010. However, I don't think this means that the record number of serious and casual viewers who tuned in to see LeBron James announce his intentions has anything to do with whether those people were going to care any more or less about the Miami Heat. Watching something for pure spectacle doesn't make you a fan of the participants. Otherwise, everyone who has tuned into the "Shaq vs." show would now be a Celtics fan.

Whitlock assertion: Was LeBron right when he said that the league would be improved by contracting a couple teams?

Stern: I actually agree with those who argue as a competitive-talent matter our current number is fine. And I distinguish that from an economic matter, if you get my drift...The issue where contraction has been raised in the past and might be raised again is when you watch teams struggle in the economic sense and they are partners of and they’re included in what I would call shared revenues, where in a couple of years we will have developed in the near future, where between licensing revenues, network television revenues and revenue sharing, where certain teams at the bottom end were getting $50 million a year from their partners from the group effort whether or not they sell a piece of merchandise or whether or not they appear on network television, then the issue gets raised among owners would it be economically sound for us to consider contraction. That’s a subject that will be fully aired after the season is over.

Dogburt: It is important to differentiate between the competitive and the economic realities that are intertwined. Competitively, the league has and will always operate on a bell curve. There will always be only two to four dominant teams that  can compete for the Championship, there will be a group of teams that will over around 38-42 wins, and then there will be those that consistently lose 3/4 of their games every year. This curve may skew one way or another from year to year, but it will remain relatively stable because the division of success is not merely divided by talent, but also executive competency. In this way, the revenue sharing is really about the front office, since executive pay is not governed by the salary cap restrictions. Contraction is not merely about the spreading out of basketball talent, but of management talent as well. I don't usually see this factor mentioned.

Whitlock assertion: LeBron is now a villain. Is this good for the league?

Stern: I don’t like it. I think that it’s theater. I don’t think he’s really viewed as a villain...You either loved or booed Kobe and the Lakers. People used to love or hate the old Celtics. I think it will morph into the Heat being one of our really elite teams. And people boo the elite teams when they come into town to beat up on the hometown team.

Dogburt: At the end of the day, LeBron's role as either super-hero or super-villain will be defined by how he handles himself off the court, not on it. "The Decision" was the height of narcissism, something you would expect to see in a WWE heel and not an NBA star. The problem though with being the villain is that you have to be "on" all the time. Kobe tried this move a few years back; he started swearing in interviews, speaking more gruffly and catering less to peoples' expectations, and the like. At the end of the day though, it didn't make him the "Mamba" or bad guy that he set out to be; it just made him seem like a dick (apologies; I just can't think of a more appropriate expression).

So it goes with LeBron. He isn't the villain; he's the foil.

Whitlock assertion: The emphasis on technical fouls early on for emotional reaction seemed overreaching, while it now seems more fair.

Stern: Players are using more restraint, so it enables the refs to be more restrained. It isn’t that they’re not punishing the conduct. The conduct has changed...We have trained both sets of people.

Dogburt: The over-reaction of players does seem to have curbed a bit.  I understand the emphasis on this, because at the end of the day the NBA is a product that people consume. They won't consume as much of it if it is distasteful. HOWEVER, when the playoffs arrive, fan expectations do change. Will the referees be able to adjust with the intensity?

Whitlock assertion: The excessive proliferation of tattoos has become an eye-sore.

Stern: I step back and say be careful because it depends upon your (perspective). It used to be afros and earrings and a whole lot of other things that were just expressions were viewed as something that was not desirable. And we stood back and said, "Come on, let’s relax." So you and your anti-tattoo thing, I say, relax, this too shall pass.

Dogburt: I think that the abundance of body art (for lack of a better word) has become so mainstream that it hardly matters. Honestly, I think most players like J.R. Smith and Chris "Birdman" Anderson are just bored with a lot of free time and money on their hands.