What To Do When Solutions Are Few

Share All sharing options for: What To Do When Solutions Are Few

What is Jeff Green?

This is the question posed by Oklahoman Thunder reporter Darnell Mayberry today.

One of the most oft-repeated lines by the talking heads of the NBA, be they Charles Barkley, John Hollinger, or even me, is that the Thunder's interior defense is going to be their long-term Achilles Heel this season. Team defense is organic in a way that the offense necessarily is not. On offense, if an offensive set breaks down, there is still a strong probability that an individual player can overcome the breakdown with a positive play that results in points. Defense, however, exists like a complex perpetual organism - the play of one player can have immediate effects on the rest of the players, and one defensive set can have an impact on future defensive sets.

The Thunder's inability to defend the post effectively has both the direct effect of opposing big men having success in the interior, as well as the effect of making it substantially more difficult on the perimeter players who try to stay in front of their own men. If the post defender loses his position, this necessitates the help defense to come from the weak side. When the help defense does come, it then opens up the floor for skip and swing passes out to perimeter players. The perimeter players then have the advantage of either open shots or a hard pump fake and dribble-drive penetration. The net result is that the Thunder are constantly playing catch-up on defense, leave shooters open, give up fouls, and allow inferior teams to remain in games longer than they should.

Is that all Jeff Green's fault?

No. Of course not. Green is being asked to consistently do something in which he does not possess the tool set to do. A true power forward has the strength and length to meet the post player head on and in a best case scenario make him think, "I"m not going anywhere on this play. Let's try something else." Green, possessing good length, good ball instincts, and general discipline in avoiding fouls, does not fit that bill to a T.

Here is the cross-road of debate where I think people are becoming a tad bit too myopic. The debates seems to be boiling down to:

Yet nobody seems to be looking at an option 3 approach, which you might call the "Apollo 13" approach. Namely, in a closed system (like a shuttle in space), presented with a problem and the limits of your ship, how do you solve that problem?
A priori, Jeff Green is a specific liability at the power forward spot. This much, we know. So how can the Thunder solve this problem, given their current resources?
If you think that I've got a table coming up, you would be correct! 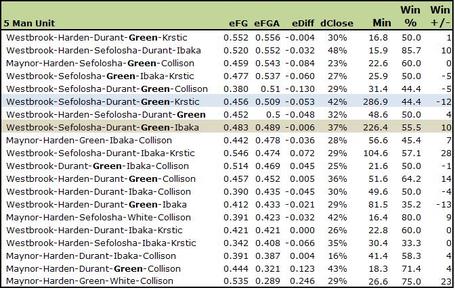 all stats provided by 82games.com

Let's take a look at this table, make some observations, and then attempt to draw a few conclusions.

I think we can see the common thread by now - the Thunder's defense is VASTLY improved whenever Ibaka is in the game. He brings greater athleticism, physicality, and shot-blocking ability over both Green and Krstic. He is also a more natural power forward than either of those two. Not only does he bring greater defensive presence by himself, but he also makes both Green and Krstic better than when they are alone or paired together.
What can we conclude?
Dogburt's recommendation (which carries all the weight of a hungry cephalopod): Move Ibaka to the starting line-up at the power forward position, with Green coming off the bench. Have Green be the first guy off the bench, substituting for Krstic. The team will not be hurt badly defensively with the switch, and will gain an up-tick offensively. Ibaka can then be substituted with Collison, who also works well with Green.
This is what the Thunder have got; there is a better solution that can be found.
And at least they're not stuck with this Jeff Greene: