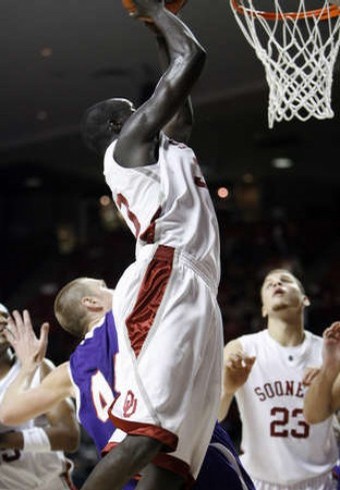 Former Sooner (and member of my personal sports name hall of fame) Longar Longar was added to the Thunder training camp roster yesterday.Though it can't be expected that he'll be backing up Serge Ibaka or Nenad Krstic this season, there's a chance he could make his way to a contract with the Tulsa 66ers if he is able to impress at camp.

Longar has been all over the place in his basketball career, including the D-League, Europe, various NBA camps and summer league rosters, and even the Harlem Globetotters. On the court, he's an athletic shot blocker with lots of energy. Off the court, he's from Sudan, has a billion brothers and sisters*, and knows more languages than Microsoft Word*.

Though this means little to the Thunder in the great scheme of things, its always good to see a local talent like Longar have success, especially if its with a team close to home. We hope to see him in a 66er uniform soon. Boomer!