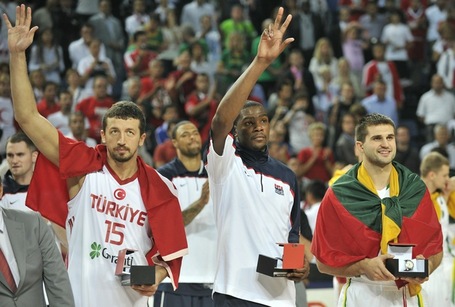 It was the final day of FIBA Action today, and the results were....well, a little bit disappointing. The one close matchup (the 5th Place game) wasn't on TV, and the other two games were all but decided by the third quarter. Then again, Kevin Durant ended up winning tournament MVP, and Team USA did grab gold, so it wasn't entirely a bad day. Continue reading for a recap of how it all went down.

The game started off all Serbia, and it was signified by a quick three to start off the game. They made their living mostly on threes or deep jumpers. Both teams clearly wanted to go inside, but the tight zone defense usually meant that a player would get blocked or stripped in the paint. Towards the end of the quarter though, the paint started to open up for Lithuania, and they quickly made up the 7 point or so deficit to take the lead at 23 to 22.

In the second, both teams started playing a man-to-man, and that opened up things a little bit in the paint. But Lithuania quickly jumped out to a 13 Point lead on the heels of some excellent three point shooting and great individual play from Linas Kleiza. Serbia was struggling to keep up, mostly because Nenad Krstic had never really gotten going, and because they were scold from beyond the arc. Serbia hit a buzzer-beating three to cut it down to 10 at the half, but things were still looking grim if they were to hope for a gold medal.

The third quarter was just more bad news for Serbia. Lithuania continued to shoot well from the outside, while Serbia continued to dump it down to Nenad Krstic or tried to cut to the hoop, but every play seemed to fail in one way or another. Eventually, Serbia's offense completely failed, and Lithuania had extended their lead to 22, with the score being 72-50. Serbia had cut it to 18 by the end of the quarter, but the game looked all but decided.

And it was. Serbia battled in the fourth to get back to within 11 by the final result, on a final meaningless Marko Keselj dunk. Lithuania took the bronze, and their fans went crazy. The indisputable MVP of the game was Linas Kleiza, who spearheaded the 2nd Quarter run that gave Lithuania an insurmountable lead. Kleiza also finished with a monstrous 33 Points, 7 Rebounds, and 4 Assists. Lithuania may be team-oriented, but they definitely couldn't have done it without Kleiza. Nenad Krstic finished with 5 Points and 8 Rebounds on 2 of 7 shooting. Novica Velickovic had 18 Points, 4 Rebounds, and 3 Assists to lead the way for Serbia.

Below: The Game We All Wanted to See, Turkey vs. Team USA.

Turkey came out with the gameplan of playing a wide zone, something which will prevent most drives to the inside, but not be so tight that it leaves a lot of wise-open jumpers. It worked relatively well early on, as Turkey managed to stay right behind Team USA. And then, it happened, as Turkey took the lead on a Turkoglu corner three with 4:05 to go. But after a quick two, Turkoglu injured himself falling to the floor, and the tide of the game quickly turned. Turkey started committing bad turnovers, and Team USA was able to bully their way inside. They finished the quarter up 22 to 17.

Team USA started playing some zone defense in the fourth, and it was rather successful, as they eventually got their lead up to 10 Points. Turkoglu came back in the game and evened it out for Turkey, with their team consistently staying behind 10 points for the rest of the quarter. Team USA had several great chances to put the game away, but they just kept missing wide-open threes. Kevin Durant really carried the team in the first half, scoring 20 of the team's 42 points.

The third quarter was one of loss and then redemption for the Turks. They started out the quarter horribly, falling behind by 20 points. How that happened I don't know, as I had to watch ESPN's replay of the game since my DVR failed to record the live event, and they cut out the first half of the third quarter. Thanks again, ESPN. In any case, the Turkish players came charging back as they started to stick to Kevin Durant, forcing Team USA to rely on other players for points. They had the deficit down to 13 by the end of the third, and could have had it back to 10 had a Ilyasova three gone down. Despite the mini-run though, Team USA looked poised to win the game, and the Turkish crowd was definitely not as hyped up as they were in the previous game against Serbia.

And the fourth quarter only sealed the deal. Turkey completely lost all sense of interior defense, and Team USA consistently burned Turkey on the inside. Turkey hit a few jumpers, but they didn't threaten to give the US a run for their money at any point. Hedo Turkoglu led Turkey with 16 Points and 7 Rebounds.

Eventually, the buzzer sounded, and Team USA had won World Championship gold for the first time in 16 years. The US players shook the hands of the Turkish players, and it was smiles all around. The medal ceremony ensued. Lithuania grabbed their first FIBA World Championship medal in the history of their country. Turkey grabbed their first medal in a World Tournament, which was silver at home. And Team USA had finally and convincingly established itself as the undisputed champion of international basketball. The Turkish fans booed, but the results spoke for themselves.

Stay tuned to Welcome to Loud City over the next couple of days as I milk this tournament for all it's worth, naming an all tournament team and ponder the question as to when the world will catch up to Team USA.